A soup is a kind of food. People make soups by boiling things in water. Then they put the things they boiled into a bowl and eat them. Vegetables are in most soups. You can also put meat in soups. Soups that are thicker than normal, with more meat or vegetables, are stews. The liquid in soup is broth. 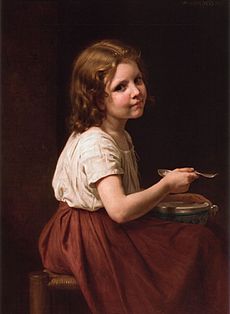 Evidence of the existence of soup can be found as far back as about 20,000 BC. Boiling was not a common cooking technique until the invention of waterproof containers (which probably came in the form of clay vessels). Animal hides and watertight baskets of bark or reeds were used before this. To boil the water hot rocks were used. This method was also used to cook acorns and other plants.

The word soup comes from French soupe ("soup", "broth"), which comes through Vulgar Latin suppa ("bread soaked in broth") from a Germanic source, from which also comes the word "sop", a piece of bread used to soak up soup or a thick stew.

The word restaurant (meaning "[something] restoring") was first used in France in the 16th century, to refer to a highly concentrated, inexpensive soup, sold by street vendors, that was advertised as an antidote to physical exhaustion. In 1765, a Parisian entrepreneur opened a shop specializing in such soups. This prompted the use of the modern word restaurant for the eating establishments.

In the US, the first colonial cookbook was published by William Parks in Williamsburg, Virginia, in 1742, based on Eliza Smith's The Compleat Housewife; or Accomplished Gentlewoman's Companion, and it included several recipes for soups and bisques. A 1772 cookbook, The Frugal Housewife, contained an entire chapter on the topic. English cooking dominated early colonial cooking; but as new immigrants arrived from other countries, other national soups gained popularity. In particular, German immigrants living in Pennsylvania were famous for their potato soups. In 1794, Jean Baptiste Gilbert Payplat dis Julien, a refugee from the French Revolution, opened an eating establishment in Boston called "The Restorator", and became known as the "Prince of Soups". The first American cooking pamphlet dedicated to soup recipes was written in 1882 by Emma Ewing: Soups and Soup Making.

Portable soup was devised in the 18th century by boiling seasoned meat until a thick, resinous syrup was left that could be dried and stored for months at a time. 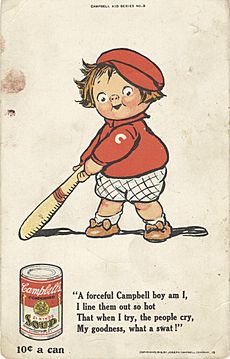 An advertisement for Campbell's canned soup, circa 1913

Commercial soup became popular with the invention of canning in the 19th century, and today a great variety of canned and dried soups are on the market.

Canned soup (condensed with liquid added, also called "ready-to-eat") can be prepared by simply heating in a pan, rather than actually cooking anything. It can be made on the stovetop or in the microwave. Such soups can be used as a base for homemade soups, with the consumer adding anything from a few vegetables to eggs, meat, cream or pasta. Doctor John T. Dorrance, a chemist with the Campbell Soup Company, invented condensed soup in 1897. Canned soup can be condensed, in which case it is prepared by adding water (or sometimes milk), or it can be "ready-to-eat", meaning that no additional liquid is needed before eating. Condensing soup allows soup to be packaged into a smaller can and sold at a lower price than other canned soups. The soup is usually doubled in volume by adding a "can full" of water or milk, about 10 US fluid ounces (300 ml).

Since the 1990s, the canned soup market has burgeoned, with non-condensed soups marketed as "ready-to-eat", so they require no additional liquid to prepare. Microwaveable bowls have expanded the "ready-to-eat" canned soup market even more, offering convenience (especially in workplaces), and making for popular lunch items. In response to concerns over the negative health effects of excessive salt intake, some soup manufacturers have introduced reduced-salt versions of popular soups.

Today, Campbell's Tomato (introduced in 1897), Cream of Mushroom, and Chicken Noodle (introduced in 1934) are three of the most popular soups in America. Americans consume approximately 2.5 billion bowls of these three soups alone each year. Other popular brands of soup include Progresso. 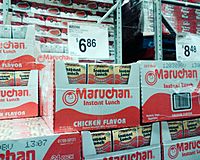 Dry soup mixes are sold by many manufacturers, and are reconstituted with hot water; other fresh ingredients may then be added.

The first dried soup was bouillon cubes; the earlier meat extract did not require refrigeration, but was a viscous liquid.

East Asian-style instant noodle soups include ramen and seasonings, and are marketed as a convenient and inexpensive instant meal, requiring only hot water for preparation.

In French cuisine, soup is often served before other dishes in a meal. In 1970, Richard Olney gave the place of the entrée in a French full menu: "A dinner that begins with a soup and runs through a fish course, an entrée, a sorbet, a roast, salad, cheese and dessert, and that may be accompanied by from three to six wines, presents a special problem of orchestration".

Fruit soups are prepared using fruit as a primary ingredient, and may be served warm or cold depending on the recipe. Many varieties of fruit soups exist, and they may be prepared based upon the availability of seasonal fruit. 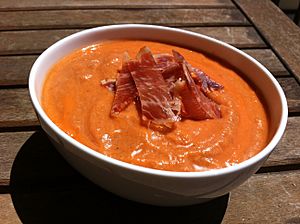 Salmorejo is a thick variant of gazpacho originating from Andalusia.

Cold soups are a particular variation on the traditional soup, wherein the temperature when served is kept at or below room temperature. They may be sweet or savory. In summer, sweet cold soups can form part of a dessert tray. An example of a savory chilled soup is gazpacho, a chilled vegetable-based soup originating from Spain. Vichyssoise is a cold purée of potatoes, leeks, and cream.

A feature of East Asian soups not normally found in Western cuisine is the use of tofu in soups. Many traditional East Asian soups are typically broths, "clear soups", or starch thickened soups. 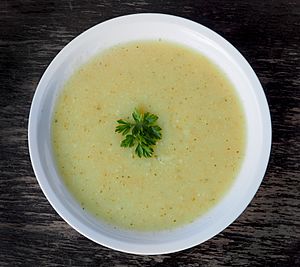 As a figure of speech 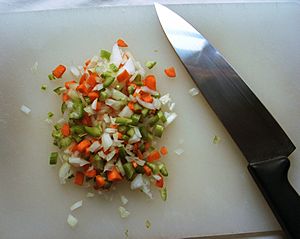 Mirepoix consists of carrot, onion and celery and is often used for soup stocks and soups.

In the English language, the word soup has developed several uses in phrase.

All content from Kiddle encyclopedia articles (including the article images and facts) can be freely used under Attribution-ShareAlike license, unless stated otherwise. Cite this article:
Soup Facts for Kids. Kiddle Encyclopedia.