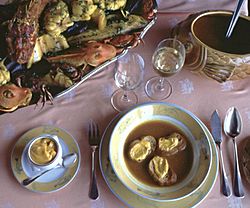 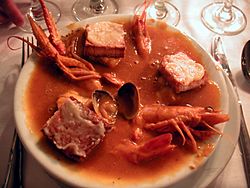 – and a quite different type 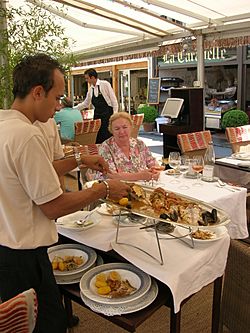 The soup being served

Bouillabaisse is a French fisherman's soup. This traditional Provençal fish stew originated in the port of Marseille. The word is a compound of bolhir (to boil) and abaissar (to reduce heat, i.e., simmer).

It was a stew made by Marseille fishermen using the bony rockfish they were unable to sell. As well as fish, the soup has mussels (fr: moules) and may have other marine invertebrates. Vegetables such as leeks, onions, tomatoes, celery, and potatoes are simmered together with the broth and served with the fish.

The broth is traditionally served with a rouille, a mayonnaise made of olive oil, garlic, saffron, and cayenne pepper on grilled slices of bread.

In Marseille, the broth is served first in a soup plate with slices of bread and rouille, then the fish is served separately on a large platter (see image). A simpler version has the fish and broth brought to the table separately and served together in large soup plates.

All content from Kiddle encyclopedia articles (including the article images and facts) can be freely used under Attribution-ShareAlike license, unless stated otherwise. Cite this article:
Bouillabaisse Facts for Kids. Kiddle Encyclopedia.