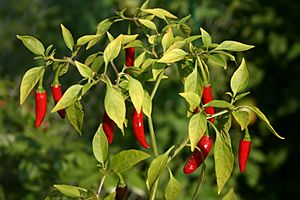 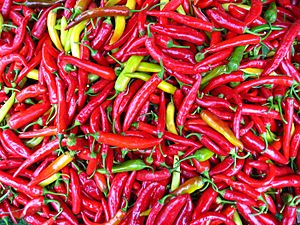 The cayenne pepper, also known as the Guinea spice, cow-horn pepper, red hot chili pepper, aleva, bird pepper,' or, especially in its powdered form, red pepper, is a cultivar of Capsicum annuum, which is related to bell peppers, jalapeños, paprika, and others. The Capsicum genus is in the nightshade family (Solanaceae). It is a hot chili pepper used to flavor dishes and named for the city of Cayenne, the capital of French Guiana.

The fruits are generally dried and ground, or pulped and baked into cakes, which are then ground and sifted to make the powdered spice of the same name.

Cayenne is used in cooking spicy dishes, as a powder or in its whole form (such as in Korean, Sichuan, and other Asian cuisine), or in a thin, vinegar-based sauce. It is generally rated at 30,000 to 50,000 Scoville units. It is also used as an herbal supplement, and was mentioned by Nicholas Culpeper in his Complete Herbal, 1653, as "guinea pepper", a misnomer for "guiana pepper".

Most cultivated varieties of cayenne, Capsicum annuum, can be grown in a variety of locations including tropical and temperate zones and need around 100 days to mature. Peppers prefer warm, moist, nutrient-rich soil in a warm climate. The plants grow to about 0.5–1 m (20–39 in) in height and should be spaced 1 m (3 ft) apart. In gardens, the plants may be planted as close as 30 cm (1 ft) apart in a raised bed, or simply grown in large pots. This may reduce the yield of an individual plant, but will increase yields per unit area.

Chilis are mostly perennial in subtropical and tropical regions; however, they are usually grown as annuals in temperate climates. They can be overwintered if protected from frost, and require some pruning.

Cayenne pepper, by weight, is high in vitamin A. It also contains vitamin B6, vitamin E, vitamin C, riboflavin, potassium, and manganese. However, given the very small amount of cayenne pepper typically consumed in a serving, it makes a negligible contribution to overall dietary intake of these nutrients.

Cayenne pepper consumption dilates the blood vessels and speeds the metabolism due to the high amounts of capsaicin. With the consumption of cayenne peppers, the amount of heat the human body puts off is influenced. In animal studies, capsaicin has the ability to boost metabolism, which in turn causes weight loss. This increases circulation and blood flow to all major organs, facilitating oxygen and nutrient delivery. Capsaicin may support a healthy energy balance while suppressing appetite. Capsaicin Capsaicin treatment sustained fat oxidation during weight maintenance, but did not affect weight regain after modest weight loss.

Cayenne is a popular spice in a variety of cuisines. It is employed variously in its fresh form, dried and powdered, and as dried flakes. It is also a key ingredient in a variety of hot sauces, particularly those employing vinegar as a preservative. Cayenne pepper is often spread on sandwiches or similar items to add a spicy flavor.

Beverage foods are emerging with cayenne extract as an active ingredient.

All content from Kiddle encyclopedia articles (including the article images and facts) can be freely used under Attribution-ShareAlike license, unless stated otherwise. Cite this article:
Cayenne pepper Facts for Kids. Kiddle Encyclopedia.