Kids Encyclopedia Facts
Not to be confused with Cayenne pepper.

Cayenne is a commune, the capital (prefecture) of the French Guiana, an overseas region and department of France that is in northern South America. The city is on a former island at the mouth of the Cayenne river on the Atlantic coast.

French colonists came back in 1643 and founded Cayenne, but they were forced to leave once more following Amerindian attacks. In 1664, France finally succeeded at establishing a permanent settlement at Cayenne. Over the next decade the colony changed hands between the French, Dutch, and English, before being restored to France. It was captured by an Anglo-Portuguese force at the invasion of Cayenne in 1809 and administered from Brazil until 1814, when it was returned to French control. It was used as a French penal colony from 1854 to 1938.

The city is surrounded by:

Cayenne has a tropical monsoonal climate (Köppen climate classification: Am) with a dry season and a heavy monsoon the rest of year and no cold season.

The inhabitants of Cayenne are known, in French, as Cayennais (women: Cayennaises).

Evolution of the population in Cayenne 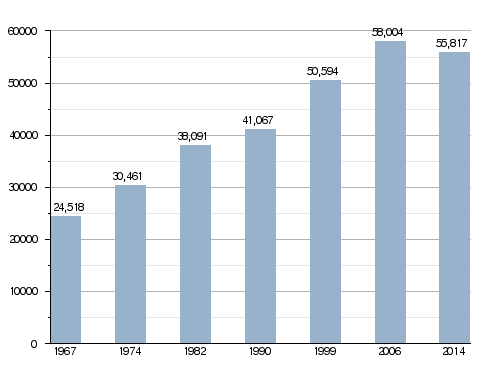 Cayenne is twinned with:

All content from Kiddle encyclopedia articles (including the article images and facts) can be freely used under Attribution-ShareAlike license, unless stated otherwise. Cite this article:
Cayenne Facts for Kids. Kiddle Encyclopedia.