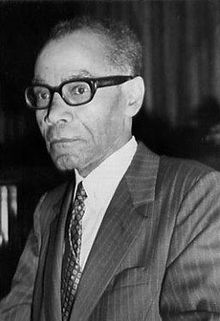 Léon-Gontran Damas (March 28, 1912 – January 22, 1978) was a French poet and politician. He was one of the founders of the Négritude movement. He also used the pseudonym Lionel Georges André Cabassou.

Léon Damas was born in Cayenne, French Guiana, to Ernest Damas, a mulatto of European and African descent, and Bathilde Damas, a Metisse of Native American and African ancestry. In 1924, Damas was sent to Martinique to attend the Lycée Victor Schoelcher (a secondary school), where he would meet his lifelong friend and collaborator Aimé Césaire.

In 1929, Damas moved to Paris to continue his studies. While he studied law under guidance from his parents, his diverse array of courses in other topics like anthropology, history, and literature sparked his interest in radical politics. There, he reunited with Césaire and was introduced to Leopold Senghor. In 1935, the three young men published the first issue of the literary review L'Étudiant Noir (The Black Student), which provided the foundation for what is now known as the Négritude Movement, a literary and ideological movement of French-speaking black intellectuals that rejects the political, social and moral domination of the West.

In 1937, Damas published his first volume of poetry, Pigments. Pigments reflected Damas' unique literary style, using the French colonial language to break boundaries of verse, meter, and metaphor. The collection touches on topics of racism, broader issues in the Western colonial culture, and more. Through Pigments, Damas explored the internalized racism and oppression that occurred within the diaspora, partly paving the way for Frantz Fanon’s “colonized personality,” explored in his seminal work, The Wretched of the Earth. Though Pigments was eventually banned by the French government as a “threat to the security of the state,” before its removal, it was translated and distributed across several countries and continents. He enlisted in the French Army during World War II, and later was elected to the French National Assembly (1948–51) as a deputy from Guiana. In the following years, Damas traveled and lectured widely in Africa, the United States, Latin America and the Caribbean. He also served as the contributing editor of Présence Africaine, one of the most respected journals of Black studies, and as senior adviser and UNESCO delegate for the Society of African Culture.

In 1970 Damas and his Brazilian-born wife Marietta, moved to Washington, D.C., to take a summer teaching job at Georgetown University. During the last years of his life, he taught at Howard University in Washington, D.C. and served as acting director of the school’s African Studies program. He died on January 22, 1978, in Washington and was buried in Guyana. Although the political aspect of his poetry held less appeal in the later years of the twentieth century, Damas’s reputation was on the rise. His poems, which sometimes experimented with typography and with the sound of words, were astonishingly modern for their time, and they seemed to anticipate the black poetry, both English and French, of a much later timeframe.

All content from Kiddle encyclopedia articles (including the article images and facts) can be freely used under Attribution-ShareAlike license, unless stated otherwise. Cite this article:
Léon Damas Facts for Kids. Kiddle Encyclopedia.