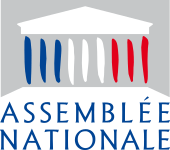 The French National Assembly (French: Assemblée nationale) is one of the two houses of the Parliament of France under the Fifth Republic. The other is the Senate ("Sénat").

The National Assembly consists of 577 members known as députés (deputies), each elected by a single-member constituency. Deputies are elected in each constituency through a two-rounds system. It is presided over by a president normally from the largest party represented, assisted by vice-presidents from across the represented political spectrum. The term of the National Assembly is five years; however, the President of France may dissolve the Assembly (by i.e.: calling a new election), unless he dissolved it in the preceding year.

The official seat of the National Assembly is the Palais Bourbon on the left bank of the river Seine.

All content from Kiddle encyclopedia articles (including the article images and facts) can be freely used under Attribution-ShareAlike license, unless stated otherwise. Cite this article:
French National Assembly Facts for Kids. Kiddle Encyclopedia.