Flag of France facts for kids 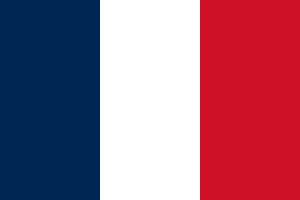 The Flag of France is called the "Tricolour" (French: le drapeau tricolore). It was adopted 15 February 1794. It is blue, white and red. The current colors are the ones that Valéry Giscard d'Estaing chose.

All content from Kiddle encyclopedia articles (including the article images and facts) can be freely used under Attribution-ShareAlike license, unless stated otherwise. Cite this article:
Flag of France Facts for Kids. Kiddle Encyclopedia.