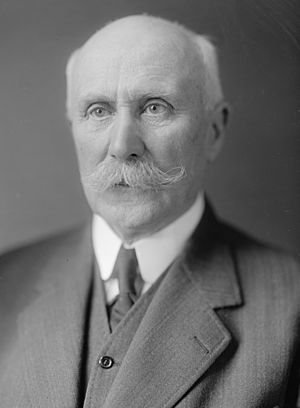 Henri Philippe Benoni Omer Joseph Pétain (24 April 1856 – 23 July 1951), generally known as Philippe Pétain or Marshal Pétain, was a French general who reached the distinction of Marshal of France, and later served as the Chief of State of Vichy France also known as Nationalist France or the French State (Chef de l'État Français), from 1940 to 1944. Pétain, who was 84 years old in 1940, ranks as France's oldest head of state. Today, he is considered the French equivalent to his contemporary Quisling in Norway. Because of his outstanding military leadership in World War I, particularly during the Battle of Verdun, Pétain was viewed as a national hero in France and was not executed. He was sometimes nicknamed The Lion of Verdun.

During World War II, with the imminent fall of France in June 1940, Pétain was appointed Prime Minister of France by President Lebrun at Bordeaux, and the Cabinet resolved to make peace with Germany. The entire government subsequently moved briefly to Clermont-Ferrand, then to the spa town of Vichy in central France. His government voted to transform the discredited French Third Republic into the French State, an authoritarian regime.

After the war, Pétain was tried and convicted for treason. He was originally sentenced to death, but his sentence was commuted to life in prison. Pétain died in 1951.

All content from Kiddle encyclopedia articles (including the article images and facts) can be freely used under Attribution-ShareAlike license, unless stated otherwise. Cite this article:
Philippe Pétain Facts for Kids. Kiddle Encyclopedia.