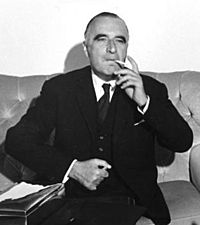 He also was Prime Minister of France from 14 April 1962 until 10 July 1968. In 1968, he was elected president. He died of lymphoma in Paris. He is the only French president of the French Fifth Republic to die in office.

All content from Kiddle encyclopedia articles (including the article images and facts) can be freely used under Attribution-ShareAlike license, unless stated otherwise. Cite this article:
Georges Pompidou Facts for Kids. Kiddle Encyclopedia.