Jean was the eldest son of Grand Duchess Charlotte and Prince Felix. Jean's primary education was in Luxemboug initially before attending Ampleforth College in England. In 1938, he was officially named Hereditary Grand Duke as heir to the throne of Luxembourg. 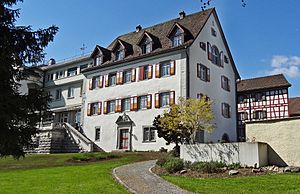 Jean was born on 5 January 1921, at Berg Castle, in central Luxembourg, the son of Grand Duchess Charlotte and of Prince Félix of Bourbon-Parma. Among his godparents was Pope Benedict XV, who gave him his second name. He attended primary school in Luxembourg, where he continued the initial stage of secondary education. He completed secondary school at Ampleforth College, a Roman Catholic boarding school in the United Kingdom. Upon reaching maturity, on 5 January 1939 he was styled 'Hereditary Grand Duke', recognising his status as heir apparent. 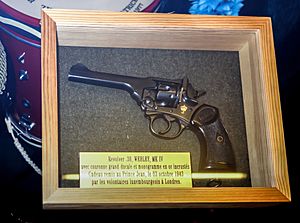 Webley revolver as used by Jean

While Luxembourg was occupied by Germans during the Second World War, the grand ducal family was abroad in exile. Jean studied at the Université Laval in Quebec City. Jean later volunteered to join the British army's Irish Guards in 1942, and after graduating from the Royal Military Academy Sandhurst, received his commission in 1943. He participated in the Normandy landings, the Battle for Caen and joined the Allied forces in the liberation of Luxembourg. From 1984 until 2000, he was made colonel of the Irish Guards. 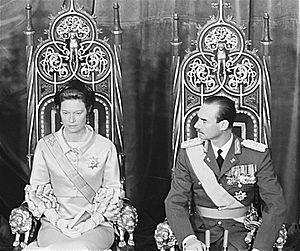 Jean of Luxembourg and his wife Josephine-Charlotte 1964

On 9 April 1953, Jean married Princess Joséphine-Charlotte of Belgium with whom he had five children. He became Grand Duke when his mother, the Grand Duchess Charlotte, abdicated on 12 November 1964. The same day, he was made a General of the Luxembourg Army. He then reigned for 36 years before he himself abdicated on 7 October 2000 and was succeeded by his son, Grand Duke Henri. 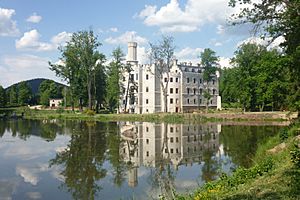 Grand Duke Jean now lives at Fischbach Castle. On 27 December 2016, Grand Duke Jean was hospitalized due to bronchitis and was discharged from hospital on 4 January 2017, a day before he celebrated his 96th birthday. The Grand Duke Jean Museum of Modern Art (Mudam) bears his name. At age of 101, he is the oldest and the longest-living current or former monarch in the world.

All content from Kiddle encyclopedia articles (including the article images and facts) can be freely used under Attribution-ShareAlike license, unless stated otherwise. Cite this article:
Jean, Grand Duke of Luxembourg Facts for Kids. Kiddle Encyclopedia.