The city is at the confluence of the Alzette and Pétrusse rivers in southern Luxembourg. In the city is found the Luxembourg Castle, built by the Franks in the Early Middle Ages, around which a settlement developed. 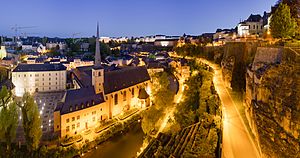 Old City of Luxembourg at night

During the Roman period, two main roads crossed the territory of the present city of Luxembourg; these two roads met at the place Marché-aux-Poissons (now a street and a neighborhood) dominated by a fortified tower. A castle was built here and it was called Lucilinburhuc ("small castle"). In 963, this place became a property of Siegfried I, a close relative of the Emperors of Germany and Kings of France. Siegfried built a castle, not far from the "Lucilinburhuc" castle, on a rocky cliff called the Bock (Luxembourgish: Bockfiels). This place is now considered the birthplace of the city, the country and the nation. 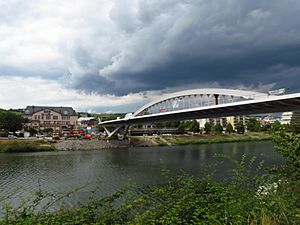 The new bridge over the Moselle.

Luxembourg's climate is on the boundary of oceanic (Cfb in the Koeppen climate classification) and humid continental (Dfb) climates.

All content from Kiddle encyclopedia articles (including the article images and facts) can be freely used under Attribution-ShareAlike license, unless stated otherwise. Cite this article:
Luxembourg City Facts for Kids. Kiddle Encyclopedia.