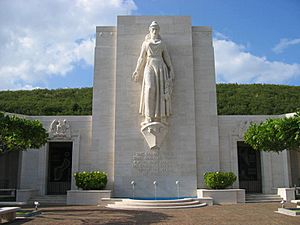 The memorial at the National Memorial Cemetery of the Pacific in Hawaii commemorates American dead from wars in the Pacific.

A memorial is an object which serves as a memory of something, usually a person who has died or a famous event. Statues are a popular type of memorial.

All content from Kiddle encyclopedia articles (including the article images and facts) can be freely used under Attribution-ShareAlike license, unless stated otherwise. Cite this article:
Memorial Facts for Kids. Kiddle Encyclopedia.