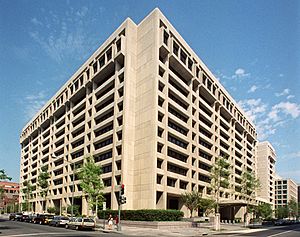 The IMF building in Washington

In the 1930s, many countries faced economic problems. The standard of living declined, and a great many people were unemployed. International trade became much smaller. Some countries reduced the value of their currencies. All these factors combined in the 1930s, and an economic depression resulted. By late 1939, the Second World War had started.

As the Second World War ended, most countries found that international values faced many restrictions and were not smooth. Leaders of many countries thought over these matters and discussed them in meetings and agreed on the Bretton Woods system. Thus, after the Second World War, many countries felt the need to have an organization to get help in monetary matters between countries. To begin with, 29 countries discussed the matter, and signed an agreement. The agreement was the Articles of Association of the International Monetary Fund. The International Monetary Fund came into being in 29th December 1945.

Any country may apply to become a member of the IMF. When a country applies for membership, the IMF’s Executive Board examines the application. If found suitable, the Executive Board gives its report to IMF’s Board of Governors. After the Board of Governor clears the application, the country may join the IMF. However, before joining, the country should fulfill legal requirements, if any, of its own country. Every member has a different voting right. Likewise, every country has a different right to draw funds. This depends on many factors, including the member country’s first subscription to the IMF.

The IMF does a number of supervisory works relating to financial dealings between different countries. Some of the works done by IMF are:

A Board of Directors manages the IMF. One tradition has governed the selection of two most senior posts of IMF. Firstly, IMF’s managing director is always European. World Bank's president is always from the United States of America.

The major countries of Europe and America control the IMF. This is because they have given more money to IMF by way of first subscriptions, and so have larger share of voting rights.

All content from Kiddle encyclopedia articles (including the article images and facts) can be freely used under Attribution-ShareAlike license, unless stated otherwise. Cite this article:
International Monetary Fund Facts for Kids. Kiddle Encyclopedia.