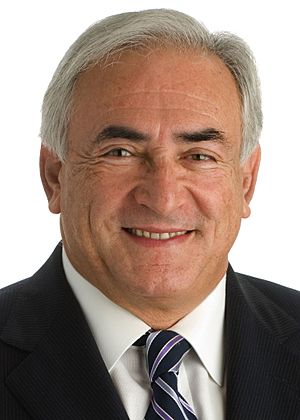 Official portrait, taken for IMF in 2008

Dominique Strauss-Kahn (born 25 April 1949) is a French politician, economist. He studied economics and is a professor for economics at a university in Paris. He has held different posts in the French government, and was the head of the International Monetary Fund from 2007 to 2011. In France, his name is usually abbreviated DSK.

He is a full professor at the Paris Institute for Political Studies ("Sciences Po"). He belongs to the right wing of the Socialist Party (PS) (which is on the center-left of French politics). He was nominated in the 2006 primary elections of his party to become a candidate for the French presidential election in 2007. Ségolène Royal defeated him in these elections in November 2006.

On 18 May 2011 he resigned from his post at the IMF, in order to be able to focus on his defense.

All content from Kiddle encyclopedia articles (including the article images and facts) can be freely used under Attribution-ShareAlike license, unless stated otherwise. Cite this article:
Dominique Strauss-Kahn Facts for Kids. Kiddle Encyclopedia.