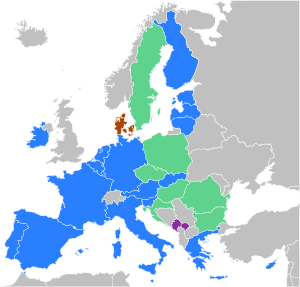 The Eurozone (also called Euro area or Euroland) is the set of countries in the European Union which have adopted the Euro (€) currency. The European Central Bank is responsible for managing the supply of money within the eurozone and political decisions are taken by the "euro group", which is a meeting of the politicians from each euro country in charge of that country's economy.

EU members that are not part of the Eurozone are Denmark, Sweden, Poland, Czech Republic, Croatia, Hungary, Bulgaria, and Romania.

There are 19 members in the Eurozone

There are other countries outside the European Union which use the euro as well, but these are not officially in the eurozone.

All content from Kiddle encyclopedia articles (including the article images and facts) can be freely used under Attribution-ShareAlike license, unless stated otherwise. Cite this article:
Eurozone Facts for Kids. Kiddle Encyclopedia.