San Marino is one of the smallest countries in the world. It is found in southern Europe and is fully surrounded by Italy (this is called an enclave, and only the Vatican City, Lesotho and San Marino are like this). Fewer than 30,000 people live there. Its total area is 61 km2. Its capital is the City of San Marino.

San Marino is the world's oldest republic that still exists. It was started on 3 September in A.D. 301 by a skilled builder called Saint Marinus. Its written constitution was adopted on October 8, 1600. The very small nation was recognized by Napoleon's France in 1797, and by the other European nations at the 1815 Congress of Vienna.

Even though it is an independent country, it depends very much on Italy. Since the 19th century, when Italy was unified, San Marino has been fully surrounded by Italy.

San Marino is covered by the Apennine mountain range, and it has a rugged terrain. The highest point in the country is Monte Titano. There are no bodies of water of any significant size. San Marino has no natural level ground. It is hilly terrain.

San Marino is the third smallest country in Europe, Only Vatican City and Monaco are smaller.

Two rivers flow through San Marino. There is no major water transport, and no major port or harbour.

These are the 9 castelli (municipalities) of San Marino: 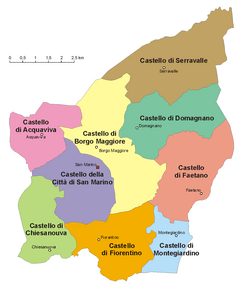 Location of the 9 castelli of San Marino

The cuisine of San Marino is strongly similar to Italian, especially that of the Emilia-Romagna and Marche regions. It has a number of its own unique dishes and products. Its best known is probably the Torta Tre Monti ("Cake of the Three Mountains" or "Cake of the Three Towers"), a wafer layered cake covered in chocolate. It shows The Three Towers of San Marino. The country also has a small wine industry.

All content from Kiddle encyclopedia articles (including the article images and facts) can be freely used under Attribution-ShareAlike license, unless stated otherwise. Cite this article:
San Marino Facts for Kids. Kiddle Encyclopedia.