Kids Encyclopedia Facts
For the saint who died in the 3rd century, see Marinus of Caesarea. For the saint sometimes known as Marinus the Monk, see Marina the Monk.

Saint Marinus ( Italian: San Marino) was the founder of a chapel and monastery in 301. From this initial community the state of San Marino later grew. 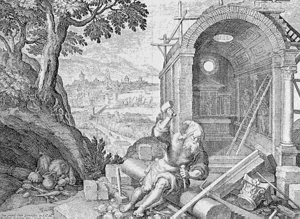 Illustration of Saint Marinus working at the chapel-monastery

Tradition holds that he was a stonemason by trade who came from the island of Arba (today Rab), on the other side of the Adriatic Sea (in what is now part of modern-day Croatia, then part of the Roman Empire), fleeing persecution for his Christian beliefs in the Diocletianic Persecution. Still known only by the single name Marinus (lit. of the sea), he became a Deacon, and was ordained by Gaudentius, the Bishop of Rimini; later, he was recognised and accused by an insane woman of being her estranged husband, so he quickly fled to Monte Titano to build a chapel-monastery and live as a hermit.

Another version of the story says that he began preaching to Christian slaves at Rimini, but soon became distracted from the evil of the world. Marinus decided to seclude himself on Mount Titano, living the life of a hermit in holy contemplation. As Marinus's reputation for his sanctity grew, others started to follow him there, until finally a lady from Rimini and the owner of Mount Titano decided to gift him the mountain.

Painting of Saint Marinus descending from heaven surrounded by the people of San Marino, painting located within the Palazzo Pubblico.

Marinus was canonised as a saint, and later, the State of San Marino grew up from the centre created by the monastery. His feast day/memorial day is 3 September, commemorating the day, in 301, when he founded what became known as San Marino, which is also the state's national holiday. He is venerated in the Roman Catholic and Eastern Orthodox faiths.

According to legend, he died in the winter of 366 and his last words were: "Relinquo vos liberos ab utroque homine" ("I leave you free from both men"). This somewhat mysterious phrase is most likely to refer to the two "men" from whose oppressive power Saint Marinus had decided to separate himself, becoming a hermit on Mount Titano: respectively the Emperor and the Pope. This affirmation of freedom (first and foremost fiscal franchise) from both the Empire and the Papal States, however legendary, has always been the inspiration of the tiny republic.

All content from Kiddle encyclopedia articles (including the article images and facts) can be freely used under Attribution-ShareAlike license, unless stated otherwise. Cite this article:
Saint Marinus Facts for Kids. Kiddle Encyclopedia.