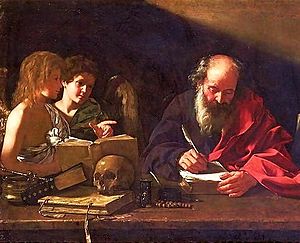 Saint Jerome, who lived as a hermit near Bethlehem, depicted in his study being visited by two angels (Cavarozzi, early 17th century)

A hermit is a person who lives on his own, away from society.

He lives in seclusion. Hermits occur in the history of several religions.

All content from Kiddle encyclopedia articles (including the article images and facts) can be freely used under Attribution-ShareAlike license, unless stated otherwise. Cite this article:
Hermit Facts for Kids. Kiddle Encyclopedia.