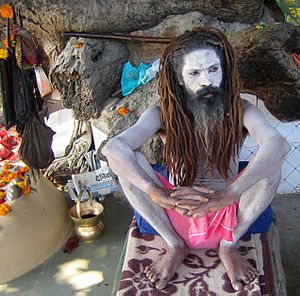 A sadhu in Haridwar, India. 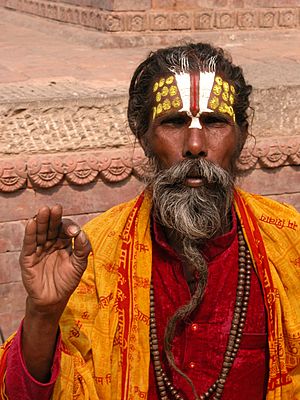 A sadhu in Kathmandu, Nepal.

In Hinduism, sadhu is a common term for an ascetic or someone who practices yoga (yogi). Sadhus have given up trying to achieve the first three Hindu goals of life: kama (enjoyment), artha (practical objectives) and even dharma (duty). The sadhu is solely dedicated to achieving moksha (liberation) through meditation and contemplation of God. Sadhus often wear ochre-colored clothing, as a symbol that they have given up many things in life.

'Sādhu!' is also a Sanskrit term used as an exclamation for something novel.

All content from Kiddle encyclopedia articles (including the article images and facts) can be freely used under Attribution-ShareAlike license, unless stated otherwise. Cite this article:
Sadhu Facts for Kids. Kiddle Encyclopedia.