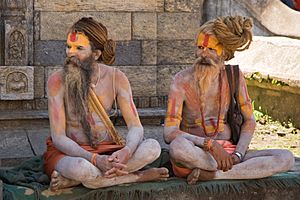 Two Hindu sadhus near Pashupatinath Temple in Kathmandu, Nepal. Usually sadhus live by themselves, and spend their days in their pursuit of moksha.

Rāja marga
Three of four paths of spirituality in Hinduism. Each path suggests a different way to moksha. 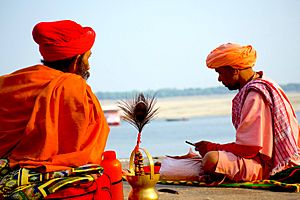 Moksha is the ultimate goal of personal spiritual development for some schools of Hinduism. It is the equivalent of Nirvana in Buddhism. In the Sanskrit language, "moksha" means freedom. it is as a state of eternal bliss and emptiness. According to Vedanta life is an endless cycle of birth, death, and rebirth into a physical universe that is actually an illusion. Hindu scriptures describe Moksha as the spiritual liberation from this cycle and the achievement of an eternal and blissful emptiness that transcends all of the joys, pain, and sorrow of the physical body or corporeal life. It is the goal of Hindu practitioners to achieve Moksha (freedom/liberation from the material world) through the practice of Yoga viz Jnana Yoga(knowledge), Karma Yoga(work), and Bhakti Yoga (through reciting prayers and worshiping God).

Moksha is a Vedic term. Scholars disagree about the precise relationship between the Moksha of Vedanta Hinduism and the Nirvana of Buddhism, but there is agreement that they are closely related historically and philosophically. Similarities can be found between Moksha and some concepts found in the Upanishads. Hindu texts explain the Moksha as Sat-Chit-Anand [needs explanation].

For a more comprehensive explanation of this topic read the books:

All content from Kiddle encyclopedia articles (including the article images and facts) can be freely used under Attribution-ShareAlike license, unless stated otherwise. Cite this article:
Moksha Facts for Kids. Kiddle Encyclopedia.