Kathmandu is the capital city and largest city of Nepal with a population of 1.5 million in the city proper, and 3 million in its wider urban areas across the Kathmandu Valley, which includes the towns of Lalitpur, Kirtipur, Madhyapur Thimi, Bhaktapur making the total population roughly 2.5 million people and the municipalities across Kathmandu valley. Kathmandu is also the largest metropolis in the Himalayan hill region. Nepali is the most spoken language in the city, while English is widely understood.

The city stands at an elevation of approximately 1,400 metres (4,600 feet) above sea level in the bowl-shaped Kathmandu Valley of central Nepal. The valley is historically termed as "Nepal Mandala" and has been the home of Newar culture, a cosmopolitan urban civilisation in the Himalayan foothills. The city was the royal capital of the Kingdom of Nepal and hosts palaces, mansions and gardens of the Nepalese aristocracy. It has been home to the headquarters of the South Asian Association for Regional Cooperation (SAARC) since 1985. Today, it is the seat of government of the Nepalese republic established in 2008.

Kathmandu is and has been for many years the centre of Nepal's history, art, culture and economy. It has a multiethnic population within a Hindu and Buddhist majority. It is also the home of the Newars. Religious and cultural festivities form a major part of the lives of people residing in Kathmandu.

Tourism is an important part of the economy; in 2013, Kathmandu was ranked third among the top ten upcoming travel destinations in the world by TripAdvisor, and ranked first in Asia. The city is the gateway to the Nepalese Himalayas, and home to seven world heritage sites: the Durbar Squares of Hanuman Dhoka, Patan and Bhaktapur; the Stupas of Swayambhunath and Baudhanath; and the temples of Pashupati and Changu Narayan. There are also seven casinos in the city.

Historic areas of Kathmandu were devastated by a 7.8 magnitude earthquake on 25 April 2015 and are in the process of reconstruction. 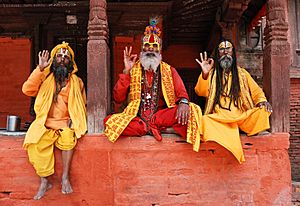 The location and terrain of Kathmandu have played a significant role in the development of a stable economy which spans millennia. The city is in an ancient lake basin, with fertile soil and flat terrain. This geography helped form a society based on agriculture. This, combined with its location between India and China, helped establish Kathmandu as an important trading centre over the centuries. Kathmandu's trade is an ancient profession that flourished along an offshoot of the Silk Road which linked India and Tibet. From centuries past, Lhasa Newar merchants of Kathmandu have conducted trade across the Himalaya and contributed to spreading art styles and Buddhism across Central Asia. Other traditional occupations are farming, metal casting, woodcarving, painting, weaving, and pottery.

Kathmandu is the most important industrial and commercial centre in Nepal. The Nepal Stock Exchange, the head office of the national bank, the chamber of commerce, as well as head offices of national and international banks, telecommunication companies, the electricity authority, and various other national and international organisations are in Kathmandu. The major economic hubs are the New Road, Durbar Marg, Ason and Putalisadak. 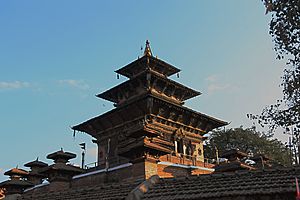 Kathmandu exports handicrafts, artworks, garments, carpets, pashmina and paper. Manufacturing is also important and accounts for 19% of the revenue that Kathmandu generates. Garments and woolen carpets are the most notable manufactured products. Other economic sectors in Kathmandu include agriculture, education, transport, and hotels and restaurants. Kathmandu is famous for lokta paper and pashmina shawls. 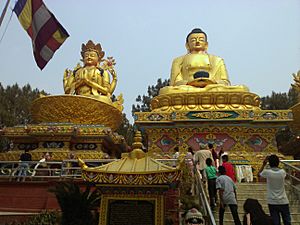 Swayambhunath is an ancient religious architecture in the Kathmandu Valley. It is probably the most sacred among Buddhist pilgrimage sites

Tourism is considered another important industry in Nepal. This industry started around 1950, as the country's political makeup changed and ended the country's isolation from the rest of the world. Furthermore, Nepal became a member of several international tourist associations. The hotel industry, travel agencies, training of tourist guides, and targeted publicity campaigns are the chief reasons for the remarkable growth of this industry in Nepal, and in Kathmandu in particular.

Since then, tourism in Nepal has thrived. It is the country's most important industry. Tourism is a major source of income for most of the people in the city, with several hundred thousand visitors annually. Hindu and Buddhist pilgrims from all over the world visit Kathmandu's religious sites such as Pashupatinath, Swayambhunath, Boudhanath, Changunarayan and Budhanilkantha. 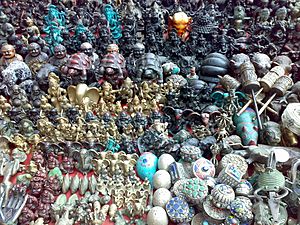 From a mere 6,179 tourists in 1961/62, the number increased to 491,504 in 1999/2000. Tourism has improved as the country turned into the Democratic Republic. The high level of tourism is attributed to the natural grandeur of the Himalayas and the rich cultural heritage of the country.

The neighbourhood of Thamel is Kathmandu's primary "traveller's ghetto", packed with guest houses, restaurants, shops, and bookstores, catering to tourists. Another neighbourhood of growing popularity is Jhamel. Jhochhen Tol, also known as Freak Street, is Kathmandu's original traveller's haunt, made popular by the hippies of the 1960s and 1970s; it remains a popular alternative to Thamel. Asan is a bazaar and ceremonial square on the old trade route to Tibet, and provides a fine example of a traditional neighbourhood.

With the opening of the tourist industry after the change in the political scenario of Nepal in 1950, the hotel industry drastically improved. Now Kathmandu boasts many luxurious hotels.

All content from Kiddle encyclopedia articles (including the article images and facts) can be freely used under Attribution-ShareAlike license, unless stated otherwise. Cite this article:
Kathmandu Facts for Kids. Kiddle Encyclopedia.