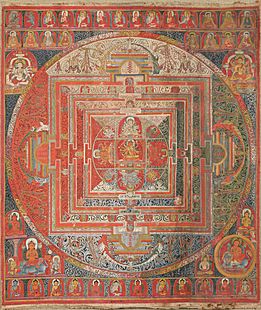 A mandala (emphasis on first syllable; Sanskrit मण्डल, maṇḍala – literally "circle") is a spiritual and ritual symbol in Hinduism and Buddhism, representing the universe. In common use, "mandala" has become a generic term for any diagram, chart or geometric pattern that represents the cosmos metaphysically or symbolically; a microcosm of the universe.

The basic form of most mandalas is a square with four gates containing a circle with a center point. Each gate is in the general shape of a T. Mandalas often have radial balance.

The term appears in the Rigveda as the name of the sections of the work, and Vedic rituals use mandalas such as the Navagraha mandala to this day. Mandalas are also used in Buddhism.

In various spiritual traditions, mandalas may be employed for focusing attention of practitioners and adepts, as a spiritual guidance tool, for establishing a sacred space and as an aid to meditation and trance induction.

All content from Kiddle encyclopedia articles (including the article images and facts) can be freely used under Attribution-ShareAlike license, unless stated otherwise. Cite this article:
Mandala Facts for Kids. Kiddle Encyclopedia.