Dee lived during a time when people were just learning the difference between science and magic. He was one of the most learned men of his time. He lectured to crowded halls at the University of Paris when still in his early twenties. Dee was an expert in mathematics, astronomy and navigation. He trained many of those who would go on voyages of discovery for England. In fact, he coined the term "British Empire".

At the same time, he was very interested in magic and Hermetic philosophy. He spent the last third of his life studying mostly these subjects. During his time, these subjects were not thought to be opposed to science. They were thought to be part of science.

He wrote Monas Hieroglyphica ("The Hieroglyphic Monad") in 1564 (about Kabbala and alchemy). He also wrote the preface to the first English translation of Euclid's works. In his lifetime, Dee amassed one of the largest libraries in England. 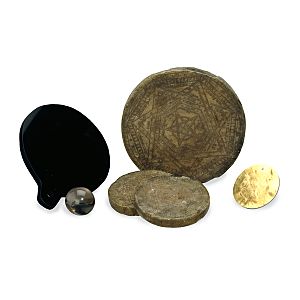 Objects used by Dee in his magic, now in the British Museum

Jonathan Dee was born in London in a Welsh family. He graduated from St. John's College, Cambridge when he was eighteen. He was a founding fellow of Trinity College. He lectured briefly at Cambridge. Then he left England to study in continental Europe and lecture in Paris and Louvain. He returned to England in the 1540s.

In 1555, he was arrested and charged with practicing black magic for having cast horoscopes of Queen Mary and Princess Elizabeth; the charges were expanded to treason against Mary. Dee appeared in the Star Chamber and cleared himself. When he was released, he became a scientific advisor to Elizabeth I, even deciding on the best date for her to be crowned in 1558.

He traveled Europe with money from Elizabeth I. He was possibly acting as a spy for her. He became a close associate of many Elizabethan explorers and entrepreneurs such as Sir Humphrey Gilbert. 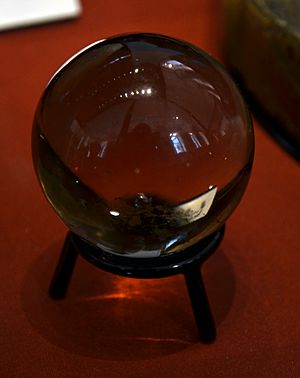 John Dee's crystal ball. Now in the collection of the British Museum

Dee was not satisfied with his knowledge. In the early 1580s, he started to use supernatural ways to get more knowledge. He wanted to get knowledge from the angels.

He met Edward Kelly in 1582 and Kelly became his companion. Kelly was a convicted forger. Kelly helped Dee to get visions from angels using a crystal ball. The angels gave them a language called Enochian and dictated several books through Kelly. Dee's crystal ball ended up in the British Museum. It went unnoticed for many years in the mineral collection. Most of the still existing papers of Dee are also in the British Museum.

In 1583, while Dee was away in Europe, his home and library at Mortlake were destroyed by a mob. Later, Dee came to believe that many of his books had been stolen by former friends and associates. He asked Queen Elizabeth for help. She made him Warden of Christ's College, Manchester, in 1592. He remained in this position until 1604.

When Elizabeth I died in 1603, so did Dee's influence: he was forced to retire to his home at Mortlake where he died in poverty.

About ten years after his death, the antiquarian Robert Cotton found some of Dee writings, mostly records of Dee's communications with angels. Cotton's son gave these writings to the scholar Méric Casaubon, who published them as a book 1659. The book was extremely popular and sold quickly.

Dee was married three times and had eight children. His eldest son was Arthur Dee. He was also an alchemist and Hermetic writer.

All content from Kiddle encyclopedia articles (including the article images and facts) can be freely used under Attribution-ShareAlike license, unless stated otherwise. Cite this article:
John Dee Facts for Kids. Kiddle Encyclopedia.