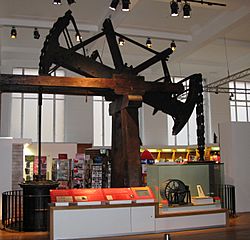 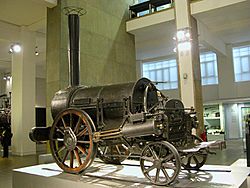 The Science Museum is one of the three large museums on Exhibition Road, London. It is part of the National Museum of Science and Industry. The museum is a big tourist attraction in London. The science museum is a great place.

It has been free to enter the Science Museum since 1 December 2001. This is because it is paid for by the government. People may have to pay to enter the temporary exhibitions.

Bennet Woodcroft started a museum in 1857. He used items from the Royal Society of Arts and the Great Exhibition. It included some machinery which became the Museum of Patents in 1858, and the Patent Office Museum in 1863. In 1883, the things held in the Patent Office Museum were moved to the South Kensington Museum. In 1885, the Science Collections were renamed the Science Museum. In 1893, the Science Museum got a separate leader. The Art Collections were renamed the Art Museum, which later became the Victoria and Albert Museum.

When Queen Victoria laid the foundation stone for the new building for the Art Museum, she said that the museum must be renamed after herself and her dead husband. The whole museum was named after them, but when that new building opened ten years later, the name was only for the Art Collections and the Science Collections were renamed. On June 26, 1909 the Science Museum, as an independent entity, came into existence. The Science Museum’s home today, designed by Sir Richard Allison, were opened to the public over time between 1919–28. This building was known as the East Block, building of which began in 1913 and was stopped during World War I. As the name suggests it was intended to be the first building of a much larger project, which was never made. 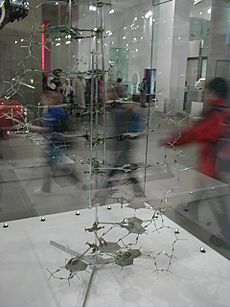 DNA reconstruction model built by Crick and Watson in 1953.

Although called a museum of science, it is really more a museum of industry. It has working models and real equipment from the industrial revolution in the 18th century, the great Victorian engineering, the age of aeroplanes and space in the 20th century.

The Science Museum holds over 300,000 items, including such famous items as Stephenson's Rocket, Puffing Billy (the oldest surviving steam locomotive), the first jet engine, a remake of Francis Crick and James Watson's model of DNA, some of the earliest remaining steam engines, a working example of Charles Babbage's Difference engine (and the latter, preserved half brain), the first prototype (draft model) of the 10,000-year Clock of the Long Now, and documentation of the first typewriter. It also contains hundreds of interactive exhibits. A recent addition is the IMAX 3D Cinema showing science and nature documentaries, most of them in 3-D, and the Wellcome Wing which focuses on digital technology.

The museum houses some of the many objects collected by Henry Wellcome that have to do with medicine. The fourth floor exhibit is called "Glimpses of Medical History", with reconstructions and dioramas of the history of medicine. The fifth floor gallery is called "Science and the Art of Medicine", with exhibits of medical instruments and practices from ancient days and from many countries. The collection has a lot of items from clinical medicine, the biosciences, and public health. The museum is a member of the London Museums of Health & Medicine.

The Science Museum has a dedicated library, and until the 1960s was Britain's National Library for Science, Medicine and Technology. It holds runs of periodicals, early books and manuscripts, and is used by scholars worldwide. It has for a number of years been run in conjunction with the Library of Imperial College, but in 2007 the Library was divided over two sites. Histories of science and biographies of scientists are still kept at the Imperial College in London. The rest of the collection which includes original scientific works and archives are now located in Wroughton, Wiltshire.

Some 170,000 items which are not on current display are stored at Blythe House in West Kensington. Blythe House also houses facilities including a conservation laboratory, a photographic studio, and a quarantine area where newly-arrived items are looked at. 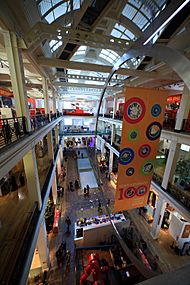 The East Hall is the first area that most visitors see as they enter the building, going up through three floors. On the ground, the area is mostly filled with famous steam engines of various sorts, including the oldest surviving James Watt beam engine, which together tell the story of the British industrial revolution. Up in the air, hung from the ceiling is a big metal ring, the inside of which is covered in white LEDs which form patterns and display messages typed into kiosks by visitors in the Energy gallery. 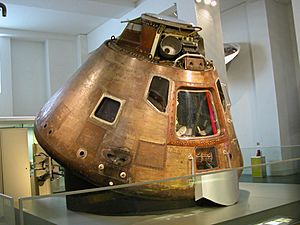 Making the Modern World is a relatively new gallery, in which some of the museum's most iconic objects, including Stephenson's Rocket and an Apollo spacecraft, are imaginatively displayed along a timeline chronicling man's technological achievements.

One of the most popular galleries in the museum is the interactive Launchpad gallery. Redesigned and reopened in November 2007, the new look gallery houses over 50 interactive exhibits illustrating many different concepts in physical science. The gallery is staffed by Explainers who are available to demonstrate how exhibits work, conduct live experiments and perform shows to schools and the visiting public.

The museum is next to the Natural History Museum and used to be connected to it by a public corridor, which is now closed. The closest London Underground station is South Kensington; a subway connects the museums to the station.

At the front of the museum to the east is Exhibition Road. Directly to the south is Museum Lane and the Natural History Museum. At the back is Queen's Gate and to the north is Imperial College.

All content from Kiddle encyclopedia articles (including the article images and facts) can be freely used under Attribution-ShareAlike license, unless stated otherwise. Cite this article:
Science Museum (London) Facts for Kids. Kiddle Encyclopedia.