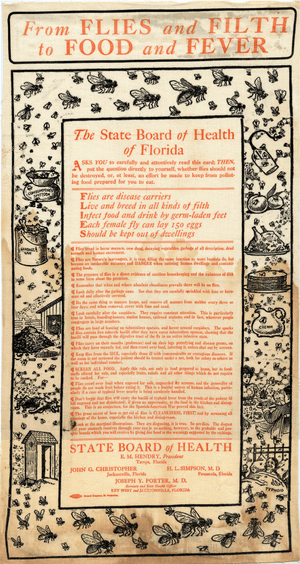 "From Flies and Filth to Food and Fever" from 1916

Public health is the science dealing with prevention there is a disease that is a threat to the overall health of a community, as well as with prolonging life and promoting health. The aims are achieved through the organized efforts and informed choices of society, public and private organizations, communities and individuals.

It bases on health analysis of a handful of people or all the inhabitants of several continents rather than on an individual. Public health includes such parts as epidemiology, biostatistics, health services, environmental, social, behavioral, and occupational health.

Public health intervention prevents rather than treats a disease through surveillance of cases and promotes healthy behaviors such as hand washing and vaccination programs. In outbreaks of an infectious disease, treating a disease may be vital to preventing it in others.

Most countries have their own government public health agencies, sometimes known as ministries of health, to respond to domestic health issues. Many diseases are preventable through simple, non-medical methods. Public health plays an important role in disease prevention efforts in the developing world and in developed countries, through local health systems and through international non-governmental organizations. In the developing world, there may not be enough trained health workers or monetary resources to provide a basic level of medical care and disease prevention.

All content from Kiddle encyclopedia articles (including the article images and facts) can be freely used under Attribution-ShareAlike license, unless stated otherwise. Cite this article:
Public health Facts for Kids. Kiddle Encyclopedia.