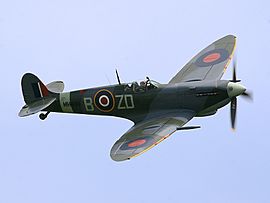 The Supermarine Spitfire is a British single-seat fighter aircraft. It was used by the Royal Air Force and many other Allied countries throughout the Second World War. The Spitfire was designed by R. J. Mitchell as a short-range, high-performance interceptor aircraft. There were more Spitfires made than any other British aircraft and it was the only British fighter that was being made throughout the war.

The Spitfire's elliptical wing had a thin cross-section. This allowed a higher top speed than other fighters of the time, including the Hawker Hurricane. The elliptic shaped wing gives the aircraft a very low amount of induced drag. Speed was seen as essential to carry out the mission of home defence against enemy bombers. The original airframe was designed to be powered by a Rolls-Royce Merlin engine producing 1,030 hp (768 kW).

Because of its higher performance, Spitfire units had a higher victory-to-loss ratio than units flying Hurricanes.

A tribute to the people who built the spitfires can be found next to the site of the factory where they were made. It is in Castle Bromwich in Birmingham. It is a sculpture called Sentinel.

Data from Spitfire: The History[184] and Jane's Fighting Aircraft of World War II[185]

All content from Kiddle encyclopedia articles (including the article images and facts) can be freely used under Attribution-ShareAlike license, unless stated otherwise. Cite this article:
Supermarine Spitfire Facts for Kids. Kiddle Encyclopedia.