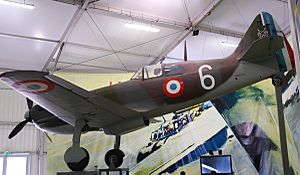 The Dewoitine D.520 is a French fighter aircraft. Its first flight was in 1938. It was, with the Morane Saulnier MS.406, the main fighter aircraft used by the French Air Force at the beginning of World War II. It was used in the Battle of France against Nazi Germany Luftwaffe fighters like Messerschmitt Bf 109. After the 1940s French defeat, some of there were delivered to Bulgaria and Luftwaffe.

All content from Kiddle encyclopedia articles (including the article images and facts) can be freely used under Attribution-ShareAlike license, unless stated otherwise. Cite this article:
Dewoitine D.520 Facts for Kids. Kiddle Encyclopedia.