Hamilton East is a suburb in central Hamilton in New Zealand. The suburb's primary commercial and retail precinct is located along Grey Street. Hamilton East is characterised by villas and bungalows built early in the 20th century.

Hamilton East is one of Hamilton's oldest suburbs. From the 1870s until the mid-20th century, Hamilton East was sometimes known as ‘Irishtown’. A significant number of the militiamen who settled there were of Irish descent, and many other Irish Catholics came to live near the Catholic Church and convent.

The town of Hamilton East merged with Hamilton West in 1877. Many of the streets were named after famous figures of the New Zealand Land Wars, including Governor George Grey and Maori chief Te Awaitaia, who went by the name William Naylor/Wiremu Neera when he converted to Christianity. Evidence of planning for the centre of the village can be seen in the village green concept of Steele Park and the planting of English trees along Grey Street. Hamilton East is one of the few suburbs of Hamilton to have a street grid plan.

Many of the parks in Hamilton East, including Hamilton Gardens, are located on the original Hamilton Town Belt that runs along the eastern and southern border of Hamilton East.

Hamilton Gardens, a 58 hectare public park, is located along the banks of the Waikato River. Hamilton Gardens is the most popular visitor attraction in the region with about 1.3 million visitors each year, nearly half of them being tourists. They were developed from the 1980s in stages, with paradise, productive, cultivar and landscape collections. The much-praised paradise collection includes a Chinese scholar’s garden, an English flower garden, a Japanese garden of contemplation, an American modernist garden, an Italian Renaissance garden and an Indian char bagh garden.

Hayes Paddock, an enclave in Hamilton East developed between 1939–1945, was planned and built according to the philosophies and ideals of the First Labour Government and the Garden City Movement. It includes curved street patterns, open plan garden layouts, low density development, and the provision of walkways and reserves. Hayes Paddock contains over 200 classic state houses built along seven streets named mostly after New Zealand governors general. 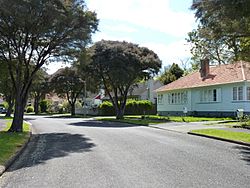 These governors general were notable and influential men of their time. Macfarlane Street, the only street not named after a governor general, was named after James MacFarlane, a partner in the Auckland company of Henderson and MacFarlane. The area that makes up Hayes Paddock was named after William Hayes who farmed the area, under lease, from 1903 to 1925.

Thanks to Hamilton heritage enthusiasts and local council processes, Hayes Paddock has received protection in the city’s district plan. The purpose of this protection was to safeguard the unique and special heritage of the Hayes Paddock area.

An extensive chronology of key events from 1978, when Hayes paddock was first identified as having heritage value, to the May 2006 Council Report leading to the council decision, can be found in the Variation to Hamilton City District Plan version 2001.

A final hearing of proposed changes was held in July 2008 and on 24 September 2008 a full Council confirmed the changes, subject to some amendments.

The Institute de Notre Dames des Missions is a Romanesque style convent and heritage site on Clyde St, Hamilton East. It was built of concrete and plaster, shielded from the road by a tall brick wall. In the 1930s, the convent was home to about 30 sisters who taught at three schools. Today, the convent is unused as the building has not been deemed earthquake proof and is currently empty, the hostel used to be used by girls that attended Sacred Heart Girls' College whilst boarding. The exterior remains unaltered but there have been major changes inside. 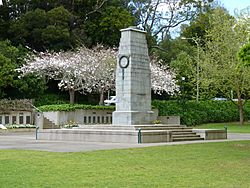 Hamilton’s first militia settlers landed on this site in 1864. On the riverbank is the hulk of the paddle steamer Rangiriri, which brought the settlers upstream. The park and cenotaph were created in memory of First World War soldiers. The park was further developed with a Second World War memorial as well as a Spitfire air-force memorial. 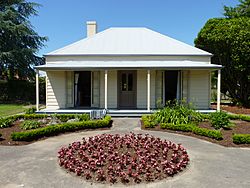 At the centre of Hamilton East is Steele Park, named for militia officer William Steele. It was originally called Sydney Square, after the New South Wales city where members of the 4th Waikato militia enlisted. The oaks around its perimeter were planted in 1889, the silver jubilee of the arrival of militia settlers. Historically used for social gatherings for settlers, today it continues to be an important venue for sport, cultural and social events. The Loyal Hamilton Lodge of the Independent Order of Oddfellows was built in 1874 on the perimeter of Steele Park. It is now The Cook Cafe and Bar.

Greenslade House is a distinctive Edwardian house on Wellington Street. It was built between 1910-1912 for a prominent Hamilton businessman and New Zealand Liberal Party MP, Henry Greenslade. The architect, John W Warren, also helped design the Waikato Hospital. It remains a private residence.

The tiny cottage on the corner of Beale and Grey Streets is Hamilton's oldest remaining house, named after the 4th Mayor of Hamilton, Bernard Charles Beale. He designed and built the simple cottage in 1872 using locally-grown kauri and kahikatea. Soon after, he added several more rooms. One room in the house was used as a surgery.

All content from Kiddle encyclopedia articles (including the article images and facts) can be freely used under Attribution-ShareAlike license, unless stated otherwise. Cite this article:
Hamilton East, New Zealand Facts for Kids. Kiddle Encyclopedia.