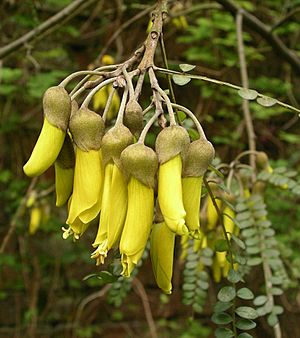 Kōwhai are small woody legume trees within the genus Sophora in the family Fabaceae that are native to New Zealand. There are eight species, with Sophora microphylla and S. tetraptera being the most recognised as large trees. Their natural habitat is beside streams and on the edges of forest, in lowland or mountain open areas. Kōwhai trees grow throughout the country and are a common feature in New Zealand gardens. Outside of New Zealand, kōwhai tend to be restricted to mild temperate maritime climates.

The blooms of the kōwhai are widely regarded as being New Zealand's national flower, although they have no official status as such.

The word kōwhai is also used in the Māori language for the colour yellow, because of the colour of the flowers.

The spelling kowhai (without a macron) is common in New Zealand English. 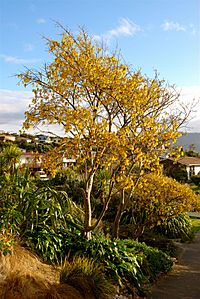 Kōwhai tree in full bloom, before foliage has emerged

The eight species of kōwhai are: 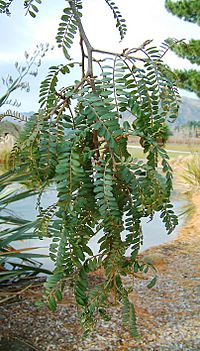 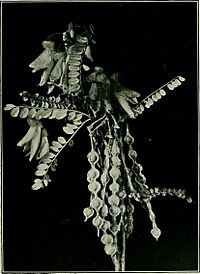 The very distinctive seed pods that appear after flowering are almost segmented, and each contains six or more smooth, hard seeds. Most species have yellow seeds, but Sophora prostrata has black ones. The seeds of Sophora microphylla can be very numerous and the presence of many hundreds of these distinctively yellow seeds on the ground quickly identifies the presence of a nearby kōwhai tree. Many species of kōwhai are semi-deciduous and lose most of their leaves immediately after flowering in October or November, but quickly produce new leaves. Flowering of kōwhai is staggered from July through to November, meaning each tree will get attention from birds such as tui, wood pigeon and bellbird. Tui are very attracted to kōwhai and will fly long distances to get a sip of its nectar.

The wood of kōwhai is dense and strong and has been used in the past for tools and machinery.

Sophora is one of the four genera of native legumes in New Zealand; the other three are Carmichaelia, Clianthus, and Montigena.

Kōwhai can be grown from seed or tip cuttings in spring and autumn. The dark or bright yellow seeds germinate best after chitting and being soaked in water for several hours. They can also benefit from a several minute submersion in boiling water to soften the hard shell and then being kept in the same water, taken off boil, for several hours to soak up the water. Young kōwhai are quite frost tender, so cuttings or seedlings should be planted in their second year when they are 30 cm or higher.

If grown from seed, kōwhai can take many years to flower, the number of years varies depending on the species.

S. prostrata, sometimes called "little baby", is used as a bonsai tree. It grows up to two metres high, has zigzagging stems, and sparse smallish leaves.

All parts of the kōwhai, but particularly the seeds, are poisonous to humans. However, there do not appear to have been any confirmed cases in humans of severe poisoning following ingestion of kōwhai in New Zealand.

Traditionally the Māori used the flexible branches as a construction material in their houses and to snare birds. The kōwhai flowers were a source of yellow dye. Also, when the kōwhai flowers bloom, in late winter and early spring, it is time to plant kumara (sweet potato).

Māori also used the kōwhai tree as medicine. The bark was heated in a calabash with hot stones, and made into a poultice to treat wounds or rubbed on a sore back or made into an infusion to treat bruising or muscular pains. If someone was bitten by a seal, an infusion (wai kōwhai) was prepared from kōwhai and applied to the wounds and the patient was said to recover within days.

All content from Kiddle encyclopedia articles (including the article images and facts) can be freely used under Attribution-ShareAlike license, unless stated otherwise. Cite this article:
Kōwhai Facts for Kids. Kiddle Encyclopedia.