Sophora prostrata is commonly known as kowhai, prostrate kowhai or dwarf kowhai and is endemic to the eastern South Island from Marlborough to the Waitaki Valley in New Zealand although most commonly found on the Banks Peninsula. 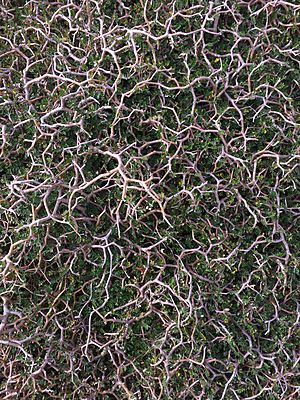 It is a low growing shrub reaching a height of around 2 metres. This species has a divaricating habit that lasts for the life of the shrub unlike other New Zealand Sophora species which lose the divaricating habit as adult trees..

The leaves of this species are usually quite small up to about 2 cm in length.

Flowers are often orange though they do occur as yellow in common with most other kowhai species. The seeds are black or very dark brown and may appear dark red. This contrasts with other native New Zealand species whose seeds are yellow.

All content from Kiddle encyclopedia articles (including the article images and facts) can be freely used under Attribution-ShareAlike license, unless stated otherwise. Cite this article:
Sophora prostrata Facts for Kids. Kiddle Encyclopedia.