Kōwhai are small woody legume trees within the genus Sophora that are native to New Zealand, there are eight species. Their natural habitat is beside streams and on the edges of forest, in lowland or mountain open areas. Kōwhai trees grow throughout the country and are a common feature in New Zealand gardens.

The blooms of the kōwhai are widely regarded as being New Zealand's national flower, although they have no official status as such.

The word kōwhai is also used in the Māori language for the colour yellow, because of the colour of the flowers. All parts of the kōwhai, but particularly the seeds, are poisonous to humans. 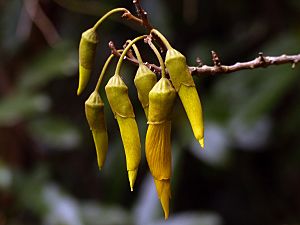 Most species of kōwhai grow to around 8 m high and have fairly smooth bark with small leaves. The very unique seed pods that appear after flowering contain six or more smooth, hard seeds. Most species have yellow seeds. The seeds of can be very numerous and the presence of many hundreds of these bright yellow seeds on the ground quickly shows that there is a nearby kōwhai tree.

Many species of kōwhai lose most of their leaves immediately after flowering in October or November, but quickly produce new leaves. Flowering of kōwhai is staggered from July through to November, meaning each tree will get attention from birds such as tui, wood pigeon and bellbird. Tui are very attracted to kōwhai and will fly long distances to get a sip of its nectar.

If grown from seed, kōwhai can take many years to flower, the number of years varies depending on the species. The wood of kōwhai is dense and strong and has been used in the past for tools and machinery. 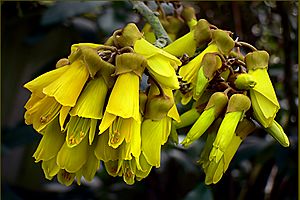 Traditionally the Māori used the flexible branches as a construction material in their houses and to snare birds. The kōwhai flowers were a source of yellow dye.

Māori also used the kōwhai tree as medicine. The bark was heated in a calabash (bottle gourd) with hot stones, and made into a poultice to treat wounds, rubbed on a sore back or made into an infusion to treat bruising or muscular pains. If someone was bitten by a seal, an infusion was prepared from kōwhai and applied to the wounds and the patient was said to recover within days.

All content from Kiddle encyclopedia articles (including the article images and facts) can be freely used under Attribution-ShareAlike license, unless stated otherwise. Cite this article:
Kowhai Facts for Kids. Kiddle Encyclopedia.