The kererū (Hemiphaga novaeseelandiae) or New Zealand pigeon is the only pigeon endemic to the New Zealand mainland. A large conspicuous pigeon with distinctive noisy wingbeats, it is the only remaining New Zealand bird capable of swallowing large fruit, and so is an important seed disperser for native trees. Kererū were a significant food source for Māori and one of the two foods harvested at the New Year. Although widespread in both forest and urban habitats, their numbers have declined significantly since European colonisation and the arrival of rats and possums, and hunting them is now illegal.

"Kererū" (singular and plural) is the most common Māori name, and now the most common name used in New Zealand English. It is also known as kūkupa and kūkū in some parts of the North Island, particularly in Northland. The name is increasingly spelled with the macron that indicates a long vowel. Kererū are also called wood pigeons, but are distinct from the wood pigeon (Columba palumbus) of the Northern Hemisphere, which is a member of a different genus. 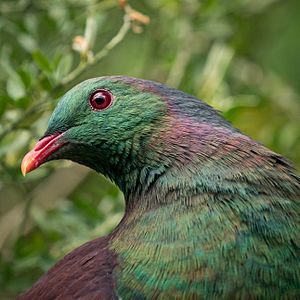 The kererū is a large, 550–850 grams (19–30 oz), arboreal fruit-pigeon found in forests from Northland to Stewart Island/Rakiura and offshore islands; kererū bone has been recovered from Raoul Island in the Kermadecs. It can be found in habitats from coastal to montane. Its morphology is that of a typical pigeon, in that it has a relatively small head, a straight soft-based bill and loosely attached feathers. It also displays typical pigeon behaviour, which includes drinking by suction, a wing-threat display, hitting with the wing when threatened, a diving display flight, a 'bowing' display, ritualised preening and 'billing' during courtship. New Zealand pigeons build flimsy, shallow, twiggy nests and feed crop milk to hatchlings.

The mainland New Zealand pigeon grows to some 51 centimetres (20 in) in length and 650 grams (23 oz) in weight, compared to 55 centimetres (22 in) and 800 grams (28 oz) for the Chatham Island variant. The head, throat and wings are generally a shiny green-purple colour, but with a bronze tinge to the feathers. The breast is typically white and the bill red with an orange-ish tip. The feet and eyes are red. Juveniles have a similar colouration but are generally paler with dull colours for the beak, eyes and feet and a shorter tail.

Kererū make occasional soft coo sounds (hence the onomatopoeic names), and their wings make a very distinctive "whooshing" sound as they fly. The bird's flight is also distinctive. Birds will often ascend slowly before making impressively steep parabolic dives; it is thought that this behaviour is often associated with nesting, or nest failure. 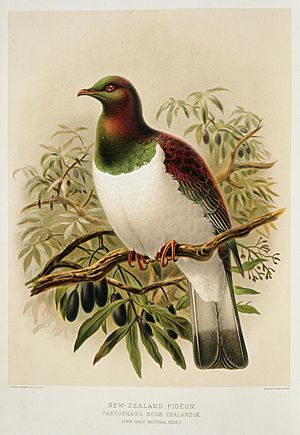 New Zealand pigeon: A History of the Birds of New Zealand, Buller, 1888

There are two subspecies of New Zealand pigeon: H. n. novaseelandiae of mainland New Zealand and the Norfolk pigeon (H. n. spadicea) of Norfolk Island, now extinct. The subspecies differed in their plumage colour and shape.

In 2001, it was proposed that a third subspecies, H. n. chathamensis or the Chatham Island pigeon, was distinct enough to be raised to full species status as H. chathamensis. This has since been accepted by most authorities. Recovering from a low of 40 birds in the 1980s, the Chatham Island pigeon population is now over 600, and the species is ranked by the IUCN as "Vulnerable", and by the New Zealand Department of Conservation as "Threatened".

The kererū belongs to the family Columbidae, and the subfamily Ptilinopinae, which is found throughout Southeast Asia, Malaya, Australia and New Zealand. The members of this subfamily feed largely on fruits, mainly drupes. Both New Zealand pigeons are members of the pigeon genus Hemiphaga (Bonaparte, 1854), which is endemic to the New Zealand archipelago and Norfolk Island. 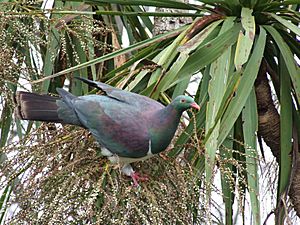 New Zealand pigeons were once the major dispersers of the seeds of cabbage trees. They eat the small white seeds in autumn and winter.

Kererū are primarily frugivorous, preferring fruit from native trees, but also eating leaves, flowers, and buds. They play an important ecological role, as they are the only birds capable of eating the largest native fruits and drupes (those with smallest diameter greater than 1 cm), such as those of the taraire, and thus spreading the seeds intact. While fruit comprises the major part of their diets, kererū also browse on leaves and buds, especially nitrogen-rich foliage during breeding.

Their diet changes seasonally as the availability of fruit changes, and leaves can comprise the major part of the diet at certain times of the year. Preferred leaves include kowhai, tree lucerne, willow, elm, and poplar. 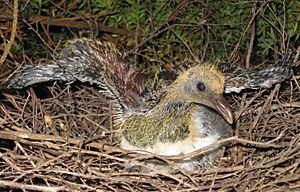 A kereru chick in the nest

Breeding generally depends on the availability of ripe fruit, which varies seasonally, annually (good years and bad years), and by location. Kererū, like other frugivorous pigeons, feed on many species with tropical affinities, including the Lauraceae and Arecaceae, which abound in the essentially subtropical forests of northern New Zealand. They also feed on podocarp species, thought to be relics of the flora of Gondwana, such as miro (Prumnopitys ferruginea) and kahikatea (Dacrycarpus dacrydioides). In the warmer northern half of the North Island, pigeons can nest all year round, except when moulting between March and May, provided enough fruit is available. Further south fewer subtropical tree species grow, and in these areas breeding usually occurs between October (early spring) and April (late summer/early autumn), again depending on fruit availability.

Kererū nest in trees, laying a single egg, in a flimsy nest constructed of a few twigs thrown together. The egg is incubated for 28–29 days and the young bird takes another 30–45 days to fledge. In seasons of plentiful fruit the pigeons can successfully nest up to four times. 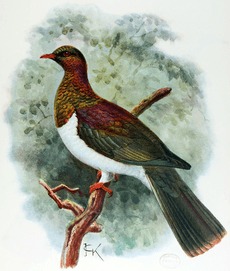 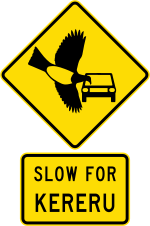 Traffic sign in New Zealand cautioning drivers of nearby Kererū

The population of the New Zealand pigeon declined considerably after the arrival of humans in New Zealand, and this trend continues, especially in the North Island, but they are still relatively common in the west of the South Island and in coastal Otago. They are commonly found in native lowland forest, scrub, the countryside, and city gardens and parks.

The introduced Australian common brushtail possum (Trichosurus vulpecula) and introduced species of rats – mainly the ship or black rat (Rattus rattus) but also the kiore or Polynesian rat (Rattus exulans) and brown rat (Rattus norvegicus) – have significantly reduced the amount of fruit available for pigeons and other native birds, and also prey on eggs and nestlings.

Pigeon populations are also under threat from hunting, habitat degradation, and poor reproductive success. Kererū were very numerous until about the 1860s and large flocks used to congregate in fruiting trees to feed. Restrictions on the shooting of pigeons were enacted as early as 1864, with total protection since 1921, although the enforcement against hunting was not consistent. Some Māori protested, claiming a traditional right to hunt the pigeon. The bird is fully protected under the 1953 Wildlife Act and there have been prosecutions for shooting it.

Kererū are considered taonga to Māori. The birds were traditionally used for both their meat and feathers – as such, for various iwi such as Ngāi Tūhoe, the kererū forms a significant part of their cultural identity. Snaring was the most common method of capturing kererū; less commonly, they were speared. One type of snaring involved waka kererū, where snares were placed on the sides of a water trough suspended in a tree. As the kererū landed to drink from the trough, they would become caught by the snare. Occasionally, tame kererū were used as decoys to entice others. Once caught, kererū were typically preserved in their own fat within tahā huahua (gourd vessels). Their feathers were retained for making korowai (cloaks), while the tails were used to decorate the tahā huahua.

The kererū also plays a part in Māori mythology and lore, and has associations with the hero and trickster Māui. In one such tradition, Māui took the form of a kererū when he went down into the underworld in search of his parents. The reason for the kereru's iridescent green-blue and white plumage is because when Māui transformed into the kererū, he was carrying the skirt/apron and belt of his mother, Tāranga. The apron, Te Taro o Tāranga, is represented by the white breast feathers; the belt, Te Tātua a Tāranga, is signified by the green-blue feathers on the neck of the kererū.

From the 1990s, the issue of whether to re-establish the customary harvest of kererū has received significant public and political attention. The first legal restrictions on kererū harvests were created by the Wild Birds Protection Act 1864, which established hunting seasons for the species. With kererū populations declining across the country, harvests became increasingly restricted by the Government. This culminated in the Animals Protection and Game Act 1921–1922, which designated the kererū as an absolutely protected species. This act would be repealed and replaced by the Wildlife Act 1953, which reaffirmed the status of kererū as a protected species and outlawed any taking of the birds. In 1994, the New Zealand Conservation Authority published a discussion paper about allowing the harvest of various species protected under the Act, including the kererū. It has been argued that preventing the customary harvests of taonga such as kererū is in-part degrading or facilitating the loss of mātauranga (traditional knowledge) among Māori. Furthermore, some argue that because the Treaty of Waitangi guarantees tangata whenua possession of taonga such as kererū, it therefore guarantees their right to harvest those taonga. Currently, customary use of kererū is restricted to the use of feathers and bones from dead birds collected by the Department of Conservation.

All content from Kiddle encyclopedia articles (including the article images and facts) can be freely used under Attribution-ShareAlike license, unless stated otherwise. Cite this article:
Kererū Facts for Kids. Kiddle Encyclopedia.