While rated vulnerable by IUCN, it is considered critically threatened in New Zealand. After the population declined to 40 birds in the late 1980s, conservation efforts have helped their numbers increase to around 500 birds, largely restricted to the southern forests of Chatham Island (particularly those around the Tuku River). A few have been seen elsewhere on Chatham Island and also further afield on Pitt and South East Islands. They were common in the 1870s but habitat destruction and predation by mammalian invasive species reduced the population to only 40 birds by 1990. Since then, predator control and stock fencing in and around the Tuku valley have resulted in improved breeding success which has led to rapid population growth. 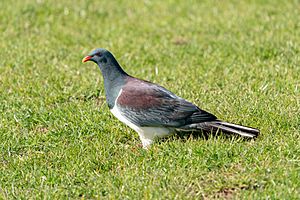 Chatham pigeon or parea foraging in a grassy field

Traditionally considered a subspecies of the kereru, it was proposed in 2001 to be distinct enough to be raised to full species status.

Chatham pigeon feed on the fruits of the hoho (Pseudopanax chathamicus), matipo, mahoe and karamu tree, and the foliage of mahoe, hoho and clover. The succulent fruits of the hoho are especially sought after. They are at their best in August and September, which coincides with the peak of the pigeon's breeding season.

Chatham pigeon is renowned for their spectacular flying dives, especially by the males, to attract a mate. Most breed at 1 to 2 years of age, laying just one egg. Chicks fledge at about 45 days old and become independent at 3 months. They have a life expectancy of up to 25 years.

All content from Kiddle encyclopedia articles (including the article images and facts) can be freely used under Attribution-ShareAlike license, unless stated otherwise. Cite this article:
Chatham pigeon Facts for Kids. Kiddle Encyclopedia.