Some of these islands are now nature reserves to protect the unique flora and fauna. As of 2013[update] the islands had a resident population of 600. The local economy depends largely on conservation, tourism, farming, and fishing.

The Chatham Islands became part of the Colony of New Zealand in 1842. 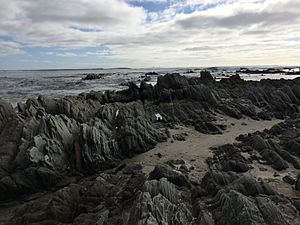 The Chatham Islands are part of the now largely submerged continent of Zealandia.

They are the only part of the Chatham Rise above sea level. This means the Chatham Islands are far from the Australian-Pacific plate boundary which causes New Zealand's geology.

The rocks are a Mesozoic schist basement covered by marine sedimentary rocks. The rocks show sections of basalt from a series of eruptions. Volcanic activity has occurred multiple times since the Cretaceous. At present there is no active volcanism near the Chatham Rise.

All content from Kiddle encyclopedia articles (including the article images and facts) can be freely used under Attribution-ShareAlike license, unless stated otherwise. Cite this article:
Chatham Islands Facts for Kids. Kiddle Encyclopedia.