Cape Turnagain is a prominent headland on the east coast of New Zealand's North Island, part way between Hawke Bay and Cook Strait, between the mouths of the Porangahau and Ākitio Rivers. 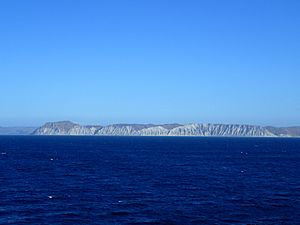 Cape Turnagain as seen from the north-east

The cape was named by Captain James Cook in 1769. On his journey of discovery, he sailed south to this point where he was met with atrocious conditions, typical of the area. Being unable to safely proceed, he decided to turn and head north and sailed anticlockwise around the North Island of New Zealand and upon reaching the same place turned again southwards & named the point as a result of his decision.

The Māori name for the cape is Te Aho a Maui, which means ‘Maui’s fishing line’, in reference to the well-known story of Maui and his brothers fishing up the land mass now known as the North Island. 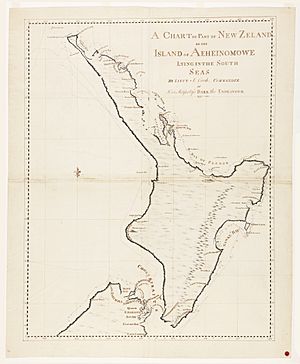 Chart by James Cook – with the Turnaround course marked

All content from Kiddle encyclopedia articles (including the article images and facts) can be freely used under Attribution-ShareAlike license, unless stated otherwise. Cite this article:
Cape Turnagain Facts for Kids. Kiddle Encyclopedia.