Cook Strait (Māori: Te Moana-o-Raukawa) separates the North and South Islands of New Zealand. The strait connects the Tasman Sea on the northwest with the South Pacific Ocean on the southeast. It is 22 kilometres (14 mi) wide at its narrowest point, and is considered one of the most dangerous and unpredictable waters in the world. Regular ferry services run across the strait between Picton in the Marlborough Sounds and Wellington.

The strait is named after James Cook, the first European commander to sail through it, in 1770. In Māori it is named Te Moana-o-Raukawa, which means The Sea of Raukawa. Raukawa is a type of woody shrub native to New Zealand. 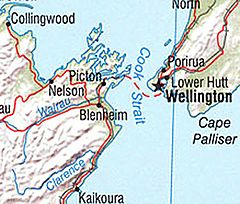 See also: The legend of Whanganui-a-Tara

In Māori legend, Cook Strait was discovered by Kupe the navigator. Kupe followed in his canoe a monstrous octopus called Te Wheke-a-Muturangi across Cook Strait and destroyed it in Tory Channel or at Pātea.

When Dutch explorer Abel Tasman first saw New Zealand in 1642, he thought Cook Strait was a bight closed to the east. He named it Zeehaen's Bight, after the Zeehaen, one of the two ships in his expedition. In 1769 James Cook established that it was a strait, which formed a navigable waterway.

Cook Strait attracted European settlers in the early 19th century. Because of its use as a whale migration route, whalers established bases in the Marlborough Sounds and in the Kapiti area. From the late 1820s until the mid-1960s Arapaoa Island was a base for whaling in the Sounds. Perano Head on the east coast of the island was the principal whaling station for the area. The houses built by the Perano family are now operated as tourist accommodation.

During the 1820s Te Rauparaha led a Māori migration to, and the conquest and settlement of, the Cook Strait region.

From 1840 more permanent settlements sprang up, first at Wellington, then at Nelson and at Whanganui (Petre). At this period the settlers saw Cook Strait in a broader sense than today's ferry-oriented New Zealanders: for them the strait stretched from Taranaki to Cape Campbell, so these early towns all clustered around "Cook Strait" (or "Cook's Strait", in the pre-Geographic Board usage of the times) as the central feature and central waterway of the new colony.

Between 1888 and 1912 a Risso's dolphin named Pelorus Jack became famous for meeting and escorting ships around the Cook Strait. Pelorus Jack was usually spotted in Admiralty Bay between Cape Francis and Collinet Point, near French Pass, a channel used by ships travelling between Wellington and Nelson. Pelorus Jack is also remembered after he was the subject of a failed assassination attempt. He was later protected by a 1904 New Zealand law. 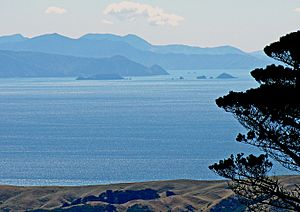 A view from the summit of Mount Kaukau across Cook Strait to the Marlborough Sounds in the distance.

The strait runs in a general NW-SE direction, with the South Island on the west side and North Island on the east. At its narrowest point, 22 kilometres (14 mi) separate Cape Terawhiti in the North Island from Perano Head on Arapaoa Island in the Marlborough Sounds. Perano Head is actually further north than Cape Terawhiti. In good weather one can see clearly across the strait.

The Brothers is a group of tiny islands in Cook Strait off the east coast of Arapaoa Island. North Brother island in this small chain is a sanctuary for the rare Brothers Island tuatara, while the largest of the islands is the site of the Brothers Island Lighthouse.

The shores of Cook Strait on both sides are mostly composed of steep cliffs. The beaches of Cloudy Bay, Clifford Bay, and Palliser Bay shoal gently down to 140 metres (460 ft), where there is a more or less extensive submarine plateau. The rest of the bottom topography is complex. To the east is the Cook Strait Canyon with steep walls descending eastwards into the bathyal depths of the Hikurangi Trench. To the north-west lies the Narrows Basin, where water is 300 and 400 metres (980 and 1,310 ft) deep. Fisherman's Rock in the north end of the Narrows Basin rises to within a few metres of low tide, and is marked by waves breaking in rough weather. A relatively shallow submarine valley lies across the northern end of the Marlborough Sounds. The bottom topography is particularly irregular around the coast of the South Island where the presence of islands, underwater rocks, and the entrances to the sounds, create violent eddies. The strait has an average depth of 128 metres (420 ft).

The South and North Islands were joined during the last ice age.

The waters of Cook Strait are dominated by strong tidal flows. The tidal flow through Cook Strait is unusual in that the tidal elevation at the ends of the strait are almost exactly out of phase with one another, so high water on one side meets low water on the other. Strong currents result, with almost zero tidal height change in the centre of the strait. Although the tidal surge should flow in one direction for six hours and then the reverse direction for six hours, a particular surge might last eight or ten hours with the reverse surge enfeebled. In especially boisterous weather conditions the reverse surge can be negated, and the flow can remain in the same direction through three surge periods and longer. This is indicated on marine charts for the region. Furthermore, the submarine ridges running off from the coast complicate the ocean flow and turbulence.

There are numerous computer models of the tidal flow through Cook Strait. While the tidal components are readily realizable, the residual flow is more difficult to model.

In April 2008, a resource consent was granted to Neptune Power for the installation of a $10 million experimental underwater tidal stream turbine capable of producing one megawatt. The turbine has been designed in Britain, and will be built in New Zealand. It will be 14 metres (46 ft) in diameter and constructed of carbon fibre. It will be placed in 80 metres (260 ft) of water, 4.5 kilometres (2.8 mi) due south of Sinclair Head, in waters known as the “Karori rip”. Power from the turbine will be brought ashore at the Island Bay substation. The turbine is a pilot, and will be sited in slower tides for testing. Neptune hopes to generate power from the unit by 2010. The company claims there is enough tidal movement in Cook Strait to generate 12 GW of power, more than one-and-a-half times New Zealand's current requirements. In practice, only some of this energy could be harnessed. As of October 2016 the Neptune Power website is a placeholder with no further announcements.

On the other side of the strait, Energy Pacifica has applied for resource consent to install up to 10 marine turbines, each able to produce up to 1.2 MW, near the Cook Strait entrance to Tory Channel. The company claims that Tory Channel is an optimal site with a tidal current speed of 3.6 metres per second (12 ft/s) and the best combination of bathymetry and accessibility to the electricity network.

The power generated by tidal marine turbines varies as the cube of the tidal speed. Because the tidal speed doubles, eight times more tidal power is produced during spring tides than at neaps.

Three submarine power cables cross Cook Strait between Oteranga Bay in the North Island and Fighting Bay in the South Island as part of the HVDC Inter-Island, which provides an electricity link between Benmore in the South island and Haywards in the North Island. Each cable operates at 350 kV, and can carry up to 500 MW, with Pole 2 of the link using one cable and Pole 3 using two cables. The link's capacity is 1200 MW, but restricted to 1000 MW due to inadequate voltage support at Haywards. The cables are laid on the seabed within a legally defined zone called the cable protection zone (CPZ). The CPZ is about 7 kilometres (4 mi) wide for most of its length, narrowing where it nears the terminals on each shore. Fishing activities and anchoring boats are prohibited within the CPZ.

Fibre optic cables carry telecommunications across Cook Strait, used by New Zealand’s main telecommunication companies for domestic and commercial traffic and by Transpower for control of the HVDC link.

Cook Strait is an important habitat for many cetacean species. Several dolphins (bottlenose, common, dusky) frequent the area along with killer whales and the endemic Hector's dolphins. Long-finned pilot whales often strand en masse at Golden Bay. The famous Pelorus Jack was a Risso's dolphin being observed escorting the ships between 1888 and 1912, though this species is not a common visitor to the New Zealand's waters. Large migratory whales attracted many whalers to the area in the winter. Currently, an annual survey of counting humpback whales is taken by Department of Conservation and former whalers help DOC to spot animals by using several vantage points along the strait such as on Stephens Island. Other occasional visitors include southern right whales, blue whales, sei whales and sperm whales. Giant squid specimens have been washed ashore around Cook Strait or found in the stomachs of sperm whales off Kaikoura.

A colony of male fur seals has long been established near Red Rocks on the south Wellington coast. Cook Strait offers good game fishing. Albacore tuna can be caught from January to May. Broadbill swordfish, bluenose, mako sharks and the occasional marlin and white shark can also be caught. 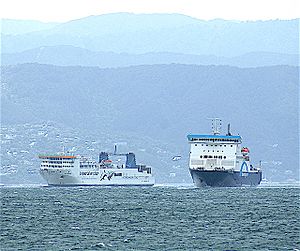 Regular ferry services run between Picton in the Marlborough Sounds and Wellington, operated by KiwiRail (the Interislander) and Strait Shipping (Bluebridge). Both companies run services several times a day. Roughly half the crossing is in the strait, and the remainder within the Sounds. The journey covers 70 kilometres (43 mi) and takes about three hours. The strait often experiences rough water and heavy swells from strong winds, especially from the south. New Zealand's position directly athwart the roaring forties means that the strait funnels westerly winds and deflects them into northerlies. As a result, ferry sailings are often disrupted and Cook Strait is regarded as one of the most dangerous and unpredictable waters in the world.

In 1968, the TEV Wahine, a Wellington–Lyttelton ferry of the Union Company, foundered at the entrance to Wellington Harbour and capsized. Of the 610 passengers and 123 crew on board, 53 died.

In 2006, 14-metre waves resulted in the Interislander ferry DEV Aratere slewing violently and heeling to 50 degrees. Three passengers and a crew member were injured, five rail wagons were toppled and many trucks and cars were heavily damaged. Maritime NZ's expert witness Gordon Wood claimed that if the ferry had capsized most passengers and crew would have been trapped inside and would have had no warning or time to put on lifejackets.

According to oral tradition, the first woman to swim Cook Strait was Hine Poupou. She swam from Kapiti Island to D'Urville Island with the help of a dolphin. Other Māori accounts tell of at least one swimmer who conquered the strait in 1831.

In modern times, the strait was first swum by Barrie Devenport in 1962. Lynne Cox was the first woman to swim it, in 1975. The most prolific swimmer of the strait is Philip Rush, who has crossed eight times, including two double crossings. Aditya Raut was the youngest swimmer at 11 years. Stephanie Bennington was the youngest female swimmer at 13 years. Pam Dickson was the oldest swimmer at 55 years. John Coutts was the first person to swim the strait in both directions. By 2010, 74 single crossings had been made by 65 individuals, and three double crossings had been made by two individuals (Philip Rush and Meda McKenzie). In March 2016, Marilyn Korzekwa became the first Canadian and oldest woman, at 58 years old, to swim the strait. Marilyn swam to raise funds and awareness for Canadian charity, Sashbear.org. Crossing times are largely determined by the strong and sometimes unpredictable currents that operate in the strait.

All content from Kiddle encyclopedia articles (including the article images and facts) can be freely used under Attribution-ShareAlike license, unless stated otherwise. Cite this article:
Cook Strait Facts for Kids. Kiddle Encyclopedia.