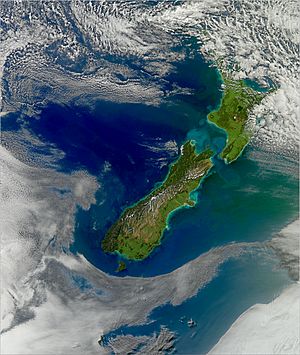 The Roaring Forties in the Cook Strait of New Zealand produce high waves, and they erode the shore as shown in this image.

The Roaring Forties are strong westerly winds found in the Southern Hemisphere, generally between the latitudes of 40 and 50 degrees. The strong west-to-east air currents are caused by the combination of air being displaced from the Equator towards the South Pole, the Earth's rotation, and the scarcity of landmasses to serve as windbreaks.

The Roaring Forties were a major aid to ships sailing the Brouwer Route from Europe to the East Indies or Australasia during the Age of Sail, and in modern usage are favoured by yachtsmen on round-the-world voyages and competitions. The boundaries of the Roaring Forties are not consistent, and shift north or south depending on the season. Similar but stronger conditions occurring in more southerly latitudes are referred to as the Furious Fifties and the Shrieking or Screaming Sixties.

Hot air rises at the Equator and is pushed towards the poles by cooler air travelling towards the Equator (an atmospheric circulation feature known as the Hadley cell). At about 30 degrees from the equator, the outward-travelling air sinks to lower altitudes, and continues toward the poles closer to the ground (the Ferrel cell), then rises up again from about 60 degrees as the air joins the Polar vortex. This travel in the 30 to 60 degree zone combines with the rotation of the earth to move the air currents from west to east, creating westerly winds.

Unlike in the northern hemisphere, the large tracts of open ocean south of the 40th parallel south (interrupted only by Tasmania, New Zealand, and the southern part of South America) allow higher windspeeds to develop. Similar but stronger wind conditions prevalent closer to the South Pole are referred to as the "Furious Fifties" (50 to 60 degrees south), and the "Shrieking" or "Screaming Sixties" (below 60 degrees south). The latitude ranges for the Roaring Forties and similar winds are not consistent, shifting towards the South Pole in the southern summer, and towards the Equator in the southern winter. 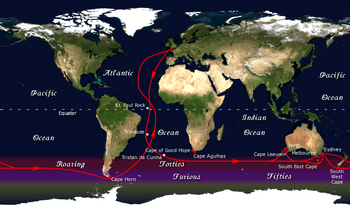 The Clipper Route, taken by ships sailing from Europe to Australia in order to take advantage of the Roaring Forties

During the Age of Sail, ships travelling from Europe to the East Indies or Australasia would sail down the west coast of Africa and round the Cape of Good Hope to use the Roaring Forties to speed their passage across the Indian Ocean, then on the return leg, continue eastwards across the Pacific Ocean and south of Cape Horn before sailing up the east coast of the Americas to home. It was first used by Dutch explorer Hendrik Brouwer in his Brouwer Route, discovered in 1611, which effectively halved the duration of the trip from Europe to Java. "To run the easting down" was the phrase used to describe the fast passages achieved in the Roaring Forties.

Round-the-world sailors also take advantage of the Roaring Forties to speed travel times, in particular those involved in record attempts or races.

All content from Kiddle encyclopedia articles (including the article images and facts) can be freely used under Attribution-ShareAlike license, unless stated otherwise. Cite this article:
Roaring Forties Facts for Kids. Kiddle Encyclopedia.