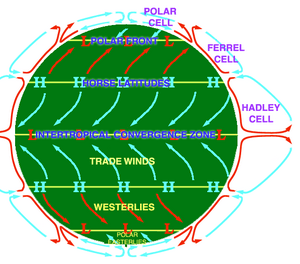 A diagram showing the relative positions of the subtropical ridge. Where it normally is, winds are nearly calm, and locations under its normal location are known as lying in the horse latitudes

The subtropical ridge is a large belt of high pressure around 30ºN in the Northern Hemisphere and 30ºS in the Southern Hemisphere. It is characterized by mostly calm winds. Air flows out from its center toward the upper and lower latitudes of each hemisphere, creating both the trade winds and the westerlies.

All content from Kiddle encyclopedia articles (including the article images and facts) can be freely used under Attribution-ShareAlike license, unless stated otherwise. Cite this article:
Subtropical ridge Facts for Kids. Kiddle Encyclopedia.