Kids Encyclopedia Facts
Not to be confused with Java programming language.

Java (Indonesian: Jawa is an island of Indonesia. At about 138,800 square kilometres (53,600 sq mi), the island is comparable in size to England, the U.S. State of North Carolina, Chinese Province of Anhui or Omsk Oblast.

Much of Indonesian history took place on Java. It was the center of powerful Hindu-Buddhist empires, the Islamic sultanates, and the core of the colonial Dutch East Indies. Java was also the center of the Indonesian struggle for independence during the 1930s and 1940s. Java dominates Indonesia politically, economically and culturally. Four of Indonesia's eight UNESCO world heritage sites are located in Java: 1) Ujung Kulon National Park, 2) Borobudur Temple, 3) Prambanan Temple, and 4) Sangiran Early Man Site.

Formed mostly as the result of volcanic eruptions, Java is the 13th largest island in the world and the fifth largest in Indonesia by landmass. A chain of volcanic mountains forms an east–west spine along the island. Three main languages are spoken on the island: Javanese, Sundanese, and Madurese. Of these, Javanese is the dominant; it is the native language of about 60 million people in Indonesia, most of whom live on Java. Furthermore, most residents are bilingual, speaking Indonesian (the official language of Indonesia) as their first or second language. While the majority of the people of Java are Muslim, Java's population is a diverse mixture of religious beliefs, ethnicities, and cultures. 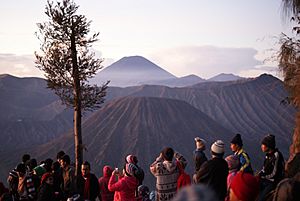 Java lies between Sumatra to the west and Bali to the east. Borneo lies to the north and Christmas Island is to the south. It is the world's 13th largest island. Java is surrounded by the Java Sea to the north, Sunda Strait to the west, the Indian Ocean to the south and Bali Strait and Madura Strait in the east.

Java is almost entirely of volcanic origin; it contains thirty-eight mountains forming an east–west spine that have at one time or another been active volcanoes. The highest volcano in Java is Mount Semeru (3,676 metres (12,060 ft)). The most active volcano in Java and also in Indonesia is Mount Merapi (2,930 metres (9,610 ft)). In total, Java boast more than 150 mountains.

More mountains and highlands help to split the interior into a series of relatively isolated regions suitable for wet-rice cultivation; the rice lands of Java are among the richest in the world. Java was the first place where Indonesian coffee was grown, starting in 1699. Today, Coffea arabica is grown on the Ijen Plateau by small-holders and larger plantations.

The area of Java is approximately 150,000 square kilometres (58,000 sq mi). It is about 1,000 km (620 mi) long and up to 210 km (130 mi) wide. The island's longest river is the 600 km long Solo River. The river rises from its source in central Java at the Lawu volcano, then flows north and eastward to its mouth in the Java Sea near the city of Surabaya. Other major rivers are Brantas, Citarum, Cimanuk and Serayu.

The average temperature ranges from 22 °C (72 °F) to 29 °C (84 °F); average humidity is 75%. The northern coastal plains are normally hotter, averaging 34 °C (93 °F) during the day in the dry season. The south coast is generally cooler than the north, and highland areas inland are even cooler. The wet season begins in November and ends in April. During that rain falls mostly in the afternoons and intermittently during other parts of the year. The wettest months are January and February. 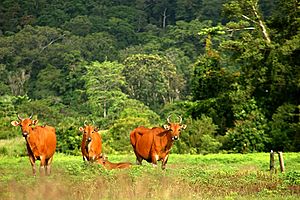 The natural environment of Java is tropical rainforest, with ecosystems ranging from coastal mangrove forests on the north coast, rocky coastal cliffs on the southern coast, and low-lying tropical forests to high altitude rainforests on the slopes of mountainous volcanic regions in the interior. Originally Javan wildlife supported a rich biodiversity, where numbers of endemic species of flora and fauna flourished; such as the Javan rhinoceros, Javan banteng, Javan warty pig, Javan hawk-eagle, Javan peafowl, Javan silvery gibbon, Javan lutung, Java mouse-deer, Javan rusa, and Javan leopard. With over 450 species of birds and 37 endemic species, Java is a birdwatcher's paradise. There are about 130 freshwater fish species in Java.

Since ancient times, people have opened the rainforest, altered the ecosystem, shaped the landscapes and created rice paddy and terraces to support the growing population. Javan rice terraces have existed for more than a millennium, and had supported ancient agricultural kingdoms. The growing human population has put severe pressure on Java's wildlife, as rainforests were diminished and confined to highland slopes or isolated peninsulas.

Some of Java's endemic species are now critically endangered, with some already extinct; Java used to have Javan tigers and Javan elephants, but both have been rendered extinct. Today, several national parks exist in Java that protect the remnants of its fragile wildlife, such as Ujung Kulon, Mount Halimun-Salak, Gede Pangrango, Baluran, Meru Betiri and Alas Purwo. 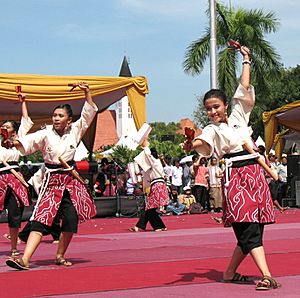 Java is divided into four provinces and two special regions: 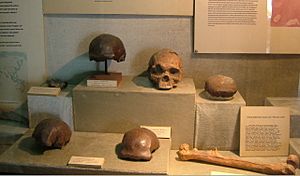 Fossilised remains of Homo erectus, popularly known as the "Java Man", dating back 1.7 million years were found along the banks of the Bengawan Solo River.

The island's exceptional fertility and rainfall allowed the development of wet-field rice cultivation, which required sophisticated levels of cooperation between villages. Out of these village alliances, small kingdoms developed. The chain of volcanic mountains and associated highlands running the length of Java kept its interior regions and peoples separate and relatively isolated.

Before the advent of Islamic states and European colonialism, the rivers provided the main means of communication, although Java's many rivers are mostly short. Only the Brantas and Sala rivers could provide long-distance communication, and this way their valleys supported the centres of major kingdoms.

A system of roads, permanent bridges and toll gates is thought to have been established in Java by at least the mid-17th century. Local powers could disrupt the routes as could the wet season and road use was highly dependent on constant maintenance. Subsequently, communication between Java's population was difficult.

Indonesian nationalism first took hold in Java in the early 20th century, and the struggle to secure the country's independence following World War II was centered in Java. In 1949, Indonesia became independent and the island has dominated Indonesian social, political and economic life, which has been the source of resentment of those residents in other islands.

All content from Kiddle encyclopedia articles (including the article images and facts) can be freely used under Attribution-ShareAlike license, unless stated otherwise. Cite this article:
Java Facts for Kids. Kiddle Encyclopedia.