Reconstruction of a specimen from Tautavel, France 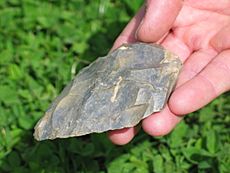 Homo erectus (Latin: "upright man") is an extinct species of the genus Homo with its earliest occurrence about 2 million years ago. Fossil remains were found in Java (1890s) and in China (1921). Nearly all of them were lost during World War II, but there are casts that are considered to be reliable evidence.

Early in the 20th century it was believed that the first modern humans lived in Asia. But during the 1950s and 1970s, many fossil finds from East Africa (Kenya) showed that the oldest hominins came from there.

H. erectus had a cranial capacity (brain size) greater than that the earlier Homo habilis. The earliest H. erectus remains have a cranial capacity of 850 cm³, while the latest Javan specimens measure up to 1100 cm³. This overlaps that of H. sapiens: the frontal bone is less sloped and the dental arcade smaller than in australopithecines. The face is more vertical (less protrusive) than either the australopithecines or H. habilis, with large brow-ridges and less prominent cheekbones.

These early hominins stood about 1.79 m (5 ft 10 in), Only 17 percent of modern male humans are taller. They were slender, with long arms and legs.

The sexual dimorphism between males and females was slightly greater than modern man, with males being about 25% larger than females. The discovery of the skeleton KNM-WT 15000, "Turkana boy" (Homo ergaster), made near Lake Turkana, Kenya by Richard Leakey and Kamoya Kimeu in 1984, is one of the most complete hominid-skeletons discovered, and has contributed greatly to the interpretation of human physiological evolution.

The most distinctive tool of erectus was the Acheulean hand axe, first invented 1.8 million years ago (mya). This hand axe was made by chipping a suitable stone with a hammer stone. Later, the neanderthals used a soft hammer made of deer antler bone to make better tools. The Acheulean hand axe lasted for over a million years as the main tool. Its main use was for butchering meat. This we know because different uses leave different micro-wear on the hand axe surfaces.

Homo erectus remains one of the most successful and long-lived species of the Homo genus. It is generally considered to have given rise to a number of descendant species and subspecies. The oldest known specimen of the ancient human was found in southern Africa.

Some of the major Homo erectus fossils:

Fossil H. erectus skulls found in Java in the 1930s have recently been redated. There are 12 skullcaps (top part of skull) and two lower leg bones. The recent research shows that on Java, H. erectus survived to about 100,000 years ago. The research gives a definitive age of between 117,000 and 108,000 years ago. That is much a much longer survival than in any other part of the world, so far as is known. This means, says the report, that H. erectus was still around when our own species was [elsewhere] walking the Earth. Java is an island, and presumably it had not yet been discovered by Neanderthals or our own species. Remains suggest that our own species did not reach Java until about 39,000 years ago.

All content from Kiddle encyclopedia articles (including the article images and facts) can be freely used under Attribution-ShareAlike license, unless stated otherwise. Cite this article:
Homo erectus Facts for Kids. Kiddle Encyclopedia.