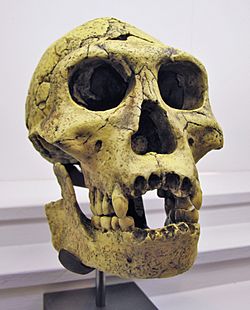 Homo georgicus is a species of Homo that was proposed in 2002. It is based on fossil skulls and jaws found in Dmanisi, Georgia in 1999 and 2001, which seem intermediate between Homo habilis and H. erectus.

A partial skeleton was discovered in 2001. The fossils are about 1.8 million years old. The remains were first discovered in 1991 by Georgian scientist, David Lordkipanidze, accompanied by an international team which unearthed the remains. Implements and animal bones were found alongside the ancient human remains.

At first, scientists thought they had found mandibles and skulls belonging to Homo ergaster, but size differences led them to name a new species.

H. georgicus is often classified as Homo erectus georgicus. The classical textbook definition of H. erectus included a brain size range of between 900–1150 ccs. If the georgicus specimens and the Flores specimens (Homo floresiensis) are included in H. erectus, then the range of brain capacities is two-fold, from 600 ccs to 1150 ccs. Homo ergaster is also considered by some to be a subspecies of H. erectus. Size has something to do with it: both the georgicus and floriensis were much smaller than the classic erectus, which was as tall as modern man. The classification of all these species or subspecies is provisional at present, and still being debated.

All content from Kiddle encyclopedia articles (including the article images and facts) can be freely used under Attribution-ShareAlike license, unless stated otherwise. Cite this article:
Homo georgicus Facts for Kids. Kiddle Encyclopedia.