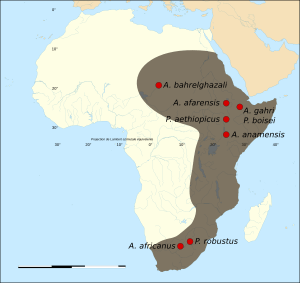 Map of the fossil sites of the early Australopithecines in Africa

Australopithecus is a genus of extinct hominids closely related to humans.

The first Australopithecus described was the Taung Child, discovered by Raymond Dart, and described in 1925.

Their remains are mostly found in East Africa, and the first fossil is from 3.9 million years ago (mya). The split from other apes would have taken place earlier, perhaps about 5 mya.

It is widely believed that the group of which they are part gave rise to the genus Homo, and hence to human beings.

It is still under discussion whether they should be put in separate genera. Here we treat the gracile forms; the robust forms are described elsewhere as Paranthropus.

Gracile australopithecines shared several traits with modern apes and humans. They were widespread throughout Eastern and Northern Africa 3.9 to 3 million years ago. 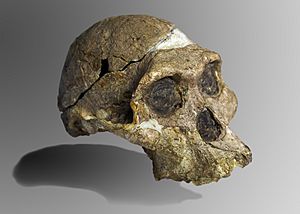 The brains of most species of Australopithecus were roughly 35% of the size of that of a modern human brain. This is not much more than the brain of a chimpanzee. Brain size in hominins does not increase significantly until the arrival of the genus Homo.

The Taung specimen had short canine teeth, and the position of the foramen magnum was evidence of bipedal locomotion.

In Australopithecus, however, males can be up to 50% larger than females, though usually less pronounced than this.

The skeleton, the fossil footprints found at Laetoli, Tanzania, the canine teeth and the foramen magnum all show that these apes had achieved bipedalism.

Australopithecus africanus used to be regarded as ancestral to the genus Homo (in particular Homo erectus).

According to the Chimpanzee Genome Project, both human (Ardipithecus, Australopithecus and Homo) and chimpanzee (Pan troglodytes and Pan paniscus) lineages diverged from a common ancestor about 5 to 6 million years ago, if we assume a constant rate of evolution.

One theory suggests that the human and chimpanzee lineages diverged somewhat at first, then some populations interbred around one million years after diverging. More likely, the assumptions behind molecular clocks do not hold exactly. The key assumption behind the technique is that, in the long run, changes in molecular structure happen at a steady rate. Researchers such as Ayala have challenged this assumption.

All content from Kiddle encyclopedia articles (including the article images and facts) can be freely used under Attribution-ShareAlike license, unless stated otherwise. Cite this article:
Australopithecus Facts for Kids. Kiddle Encyclopedia.