Cradle of Humankind facts for kids

The Cradle of Humankind is a World Heritage Site. It was first named by UNESCO in 1999. The site is about 50 kilometres northwest of Johannesburg, South Africa in the Gauteng province, and occupies 47,000 hectares (180 sq mi).

The site's limestone caves, including the Sterkfontein Caves, were where fossils were found. A 2.3-million year-old fossil Australopithecus africanus (nicknamed 'Mrs. Ples') was found in 1947 by Robert Broom and John T. Robinson. The find followed the 1924 discovery of the juvenile Australopithecus africanus skull, 'Taung Child', by Raymond Dart, at Taung in the North West Province of South Africa, where excavations still continue. 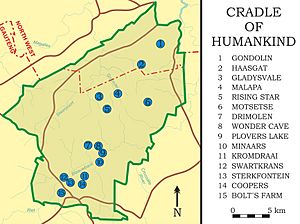 The name Cradle of Humankind reflects the fact that the site has produced a large number of (as well as some of the oldest) hominin fossils ever found, some dating back as far as 3.5 million years ago. 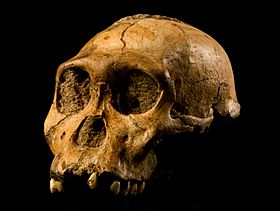 The remains of several partial skeletons of a previously unknown Australopithecan species were found in 2008 near Johannesburg. They have been dated to about two million year ago (mya). A recent re-examination of two partial skeletons of Australopithecus sediba has led to its identification as close to the origin of the genus Homo. Not all palaeoanthropologists agree this is a new species.

A new analysis shows this species had a human-like pelvis, hands and teeth, and a chimpanzee-like foot. The findings suggest that some species of australopithecine climbed trees, some walked on the ground, and some did both.

Colleagues in England investigated the teeth. Like other parts of the skeleton, the teeth are a mosaic of primitive and human-like features.

There are more than three dozen fossil-bearing caves in the Cradle of Humankind, including: 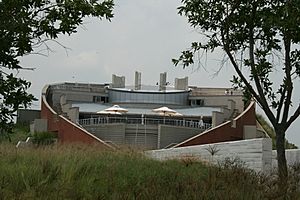 The hominin remains at the Cradle of Humankind are found in dolomitic caves and are often encased in a mixture of limestone and other sediments called breccia and fossilised over time. Hominids may have lived all over Africa, but their remains are found only at sites where conditions allowed for the formation and preservation of fossils.

All content from Kiddle encyclopedia articles (including the article images and facts) can be freely used under Attribution-ShareAlike license, unless stated otherwise. Cite this article:
Cradle of Humankind Facts for Kids. Kiddle Encyclopedia.