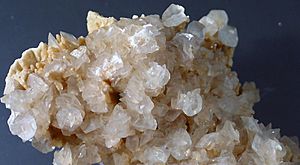 Dolomite is the name of a sedimentary carbonate rock and a mineral, both composed of calcium magnesium carbonate CaMg(CO3)2 found in crystals.

Dolomite rock (also 'dolostone') is composed predominantly of the mineral dolomite. Limestone that is partially replaced by dolomite is referred to as dolomitic limestone, or in old U.S. geologic literature as magnesian limestone. Dolomite was first described in 1791 for exposures in what are now known as the Dolomite Alps of northern Italy.

Most probably the mineral dolomite was first described by Carl Linnaeus in 1768. In 1791, it was described as a rock by the French naturalist and geologist Déodat Gratet de Dolomieu (1750–1801), first in buildings of the old city of Rome, and later as samples collected in the mountains now known as the Dolomite Alps of northern Italy. Nicolas-Théodore de Saussure first named the mineral (after Dolomieu) in March 1792.

The mineral dolomite crystallizes in the trigonal-rhombohedral system. It forms white, tan, gray, or pink crystals. Dolomite is a double carbonate, having an alternating structural arrangement of calcium and magnesium ions. It does not rapidly dissolve or effervesce (fizz) in dilute hydrochloric acid as calcite does. Crystal twinning is common.

Because dolomite can be dissolved by slightly acidic water, areas of dolomite are important as aquifers and contribute to karst terrain formation.

Modern dolomite formation has been found to occur under anaerobic conditions in supersaturated saline lagoons along the Rio de Janeiro coast of Brazil, namely, Lagoa Vermelha and Brejo do Espinho. It is often thought that dolomite will develop only with the help of sulfate-reducing bacteria (e.g. Desulfovibrio brasiliensis). However, low-temperature dolomite may occur in natural environments rich in organic matter and microbial cell surfaces. This occurs as a result of magnesium complexation by carboxyl groups associated with organic matter. 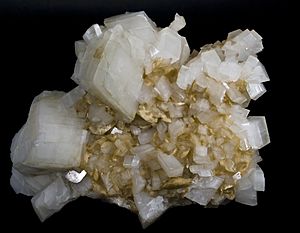 Vast deposits of dolomite are present in the geological record, but the mineral is relatively rare in modern environments. Reproducible, inorganic low-temperature syntheses of dolomite and magnesite were published for the first time in 1999. Those laboratory experiments showed how the initial precipitation of a metastable "precursor" (such as magnesium calcite) will change gradually into more and more of the stable phase (such as dolomite or magnesite) during periodical intervals of dissolution and re-precipitation. The general principle governing the course of this irreversible geochemical reaction has been coined "breaking Ostwald's step rule".

There is some evidence for a biogenic occurrence of dolomite. One example is that of the formation of dolomite in the urinary bladder of a Dalmatian dog, possibly as the result of an illness or infection. 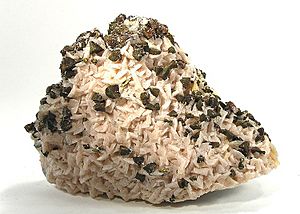 Dolomite is used as an ornamental stone, a concrete aggregate, and a source of magnesium oxide, as well as in the Pidgeon process for the production of magnesium. It is an important petroleum reservoir rock, and serves as the host rock for large strata-bound Mississippi Valley-Type (MVT) ore deposits of base metals such as lead, zinc, and copper. Where calcite limestone is uncommon or too costly, dolomite is sometimes used in its place as a flux for the smelting of iron and steel. Large quantities of processed dolomite are used in the production of float glass.

In horticulture, dolomite and dolomitic limestone are added to soils and soilless potting mixes as a pH buffer and as a magnesium source. Home and container gardening are common examples of this use.

Dolomite is also used as the substrate in marine (saltwater) aquariums to help buffer changes in pH of the water.

Calcined dolomite is also used as a catalyst for destruction of tar in the gasification of biomass at high temperature.

All content from Kiddle encyclopedia articles (including the article images and facts) can be freely used under Attribution-ShareAlike license, unless stated otherwise. Cite this article:
Dolomite Facts for Kids. Kiddle Encyclopedia.