The Dalmatian (Croatian: Dalmatinac) is a breed of dog. It is named after the Adriatic coast of Dalmatia, in Croatia, its first home. The origins of the breed are unknown. The Dalmatian has been used for a war dog, fire department mascot, and shepherd. It is best known, however, as a coach or carriage dog, being a guard for horse-pulled vehicles. Also, the Dalmatian was used for being a circus performer, vermin hunter, fire-apparatus follower, bird dog, hound dog, and as a guard dog.

There are lots of arguments about the origin of this dog. Spotted dogs are known very much in the history of Africa, Europe, and Asia. Spotted dogs are also thought to have lived in Egypt. In 1700, a dog known as the Bengal pointer, which looked a bit like the Dalmatian, was popular in England. Some think the Dalmatian is from Croatia, and is a Croatian breed. In the Middle Ages, it was used as a hound dog for hunting. The breed became popular as a carriage dog in the 1800s. They walked among the horses and carriages, following their masters, and guarding the carriages and horses while the master was busy with other things. 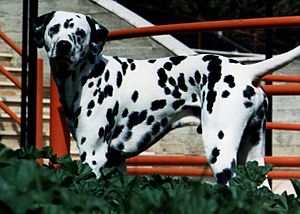 The Dalmatian is a medium , strong dog. Its skull is flat on the top. The muzzle is almost the same length as the top of the skull. Its nose can be either black, brown (liver), blue, or a dark gray that looks like black. Its round eyes are either brown or blue, or sometimes both put together.

Its toenails are white or black in dogs with a black spotted coat and brown or white in those with liver colored spots. Puppies are usually born completely white and the spots develop a few weeks after they are born.

Around 8% of Dalmatians are born deaf and some can become partially deaf after a while making them expensive to treat. 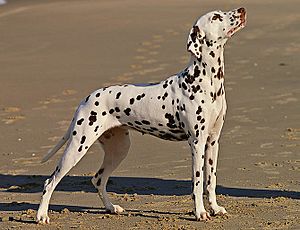 A tricolor Dalmatian female - with tan spotting on the eyebrows, snout, cheeks, neck, chest, and legs.

The Dalmatian is a medium sized, well-defined, muscular dog with excellent endurance and stamina. When full grown, according to the American Kennel Club breed standard, it stands from 19 to 23 inches (48 to 58 cm) tall, with males usually slightly larger than females. The Kennel Club in the UK allows a height up to 24 inches (61 cm). The body is as long from forechest to buttocks as it is tall at the withers, and the shoulders are laid back. The Dalmatian's feet are round with well-arched toes, and the nails are usually white or the same colour as the dog's spots. The thin ears taper towards the tip and are set fairly high and close to the head. Eye color varies between brown, amber, or blue, with some dogs having one blue eye and one brown eye, or other combinations.

Dalmatian puppies are born with plain white coats and their first spots usually appear within 3 to 4 weeks after birth. After about a month, they have most of their spots, although they continue to develop throughout life at a much slower rate. Spots usually range in size from 30 to 60 mm, and are most commonly black or brown (liver) on a white background. Other, more rare colors, include blue (a blue-grayish color), brindle, mosaic, tricolored (with tan spotting on the eyebrows, cheeks, legs, and chest), and orange or lemon (dark to pale yellow). Patches of color appear anywhere on the body, mostly on the head or ears, and usually consist of a solid color.

The Dalmatian coat is usually short, fine, and dense; however, smooth-coated Dalmatians occasionally produce long-coated offspring. These individuals experience much less shedding than their smooth-coated counterparts, which shed considerably year-round. The standard variety's short, stiff hairs often weave into carpet, clothing, upholstery and nearly any other kind of fabric and can be difficult to remove. Weekly grooming with a hound mitt or curry can lessen the amount of hair Dalmatians shed, although nothing can completely prevent shedding. Due to the minimal amount of oil in their coats, Dalmatians lack a "dog smell" and stay fairly clean relative to many other dog breeds.

Dalmatians usually have litters of six to nine pups, but they have been known to have larger litters on occasion, such as a massive eighteen puppy brood born in January 2009 (all were healthy).

Dalmatians are a relatively healthy and easy to keep breed. Like other breeds, Dalmatians display a propensity towards certain health problems specific to their breed, such as deafness, allergies and urinary stones. Reputable breeders have their puppies BAER (Brainstem Auditory Evoked Response) tested to ensure the status of the hearing on their pups. The Dalmatian Club of America lists the average lifespan of a Dalmatian at between 11 and 13 years, although some can live as long as 15 to 16 years. Breed health surveys in the US and the UK show an average lifespan of 9.9 and 11.55 years, respectively. In their late teens, both males and females may suffer bone spurs and arthritic conditions. Autoimmune thyroiditis may be a relatively common condition for the breed, affecting 11.6% of dogs.

A genetic predisposition for deafness is a serious health problem for Dalmatians; only about 70% have normal hearing. Deafness was not recognized by early breeders, so the breed was thought to be unintelligent. Even after recognizing the problem as a genetic fault, breeders did not understand the dogs' nature, and deafness in Dalmatians continues to be a frequent problem.

Researchers now know deafness in albino and piebald animals is caused by the absence of mature melanocytes in the inner ear. This may affect one or both ears. The condition is also common in other canine breeds that share a genetic propensity for light pigmentation. This includes, but is not limited to Bull Terriers, Dogo Argentinos, Poodles, Boxers, Border Collies and Great Danes.

Typically, only dogs with bilateral hearing are bred, although those with unilateral hearing, and even dogs with bilateral deafness, make fine pets with appropriate training. The Dalmatian Club of America's position on deaf pups is that they should always be euthanized and never be sold or placed to pet homes. Dalmatians with large patches of colour present at birth may have a lower rate of deafness. Selecting for this trait may reduce the frequency of deafness in the breed. However, patches are a disqualifying factor in Dalmatian breed standards in an effort to preserve the spotted coat (the continual breeding of patched dogs would result in heavily patched Dalmatians with few spots).

Blue-eyed Dalmatians are thought to have a greater incidence of deafness than brown-eyed Dalmatians, although a mechanism of association between the two characteristics has yet to be conclusively established. Some kennel clubs discourage the use of blue-eyed dogs in breeding programs.

The Dalmatian Heritage Project began in 2005. The goal of the project is to preserve and improve the Dalmatian breed by breeding parent dogs with the following traits:

All puppies in the Heritage Project are descendants of Dr. Robert Schaible's parent line. Today, "Dr. Schaible’s line produces the only Dalmatians in the world today that are free of a metabolic defect that can lead to urinary tract problems." 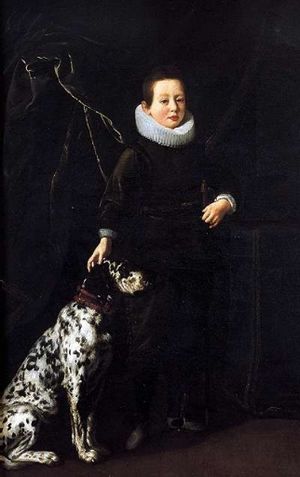 The origins of the Dalmatian are still largely unknown, with its beginning buried so deep in the past that it is still debatable as to where the breed originated. In the late 18th century, there was a type of white spotted dog known as the Talbot Hound and these dogs were used to accompany horse-drawn carriages and guard the passengers and the cargo. In 1791, Thomas Bewick named this type of dog as the Dalmatian.

During the Regency period, the Dalmatian became a status symbol trotting alongside the horse-drawn carriages and those with decorative spotting were highly prized. For this reason, the breed earned the epithet 'the Spotted Coach Dog.' The breed was also used to guard the stables at night.

The first unofficial standard for the breed was introduced in 1882 by an Englishman named Vero Shaw. In 1890, with the formation of the first Dalmatian Club in England, the standard became official. 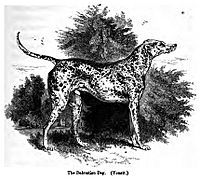 A Dalmatian, published in 1859

The roles of this ancient breed are as varied as their reputed ancestors. They were used as dogs of war, guarding the borders of Dalmatia. To this day, the breed retains a high guarding instinct; although friendly and loyal to those the dog knows and trusts, it is often aloof with strangers and unknown dogs. Dalmatians have a strong hunting instinct and are an excellent exterminator of rats and vermin. In sporting, they have been used as bird dogs, trail hounds, retrievers, or in packs for wild boar or stag hunting. Their dramatic markings and intelligence have made them successful circus dogs throughout the years.

Dalmatians are perhaps best known for working for the firefighters for their role as firefighting apparatus escorts and firehouse mascots. Since Dalmatians and horses are very compatible, the dogs were easily trained to run in front of the carriages to help clear a path and quickly guide the horses and firefighters to the fires.

Dalmatians are often considered to make good watchdogs, and they may have been useful to fire brigades as guard dogs to protect a firehouse and its equipment. Fire engines used to be drawn by fast and powerful horses, a tempting target for thieves, so Dalmatians were kept in the firehouse as deterrence to theft.

Dalmatian in a parade

Particularly in the United States the use of Dalmatians as carriage dogs was transferred to horse-drawn fire engines. Today, the Dalmatian serves as a firehouse mascot and is sometimes used to educate the public in fire safety, but in the days of horse-drawn fire carts, they provided a valuable service, having a natural affinity to horses. They would run alongside the horses, or beneath the cart axles. The horses have long since gone, but the Dalmatians, by tradition, have stayed. As a result, in the United States, Dalmatians are commonly known as firehouse dogs. Dalmatians are still chosen by many firefighters as pets, in honor of their past. The Dalmatian is also the mascot of the Pi Kappa Alpha International Fraternity. In the past, Pi Kappa Alpha has been known as the firefighters' fraternity, and this is why they both share the dalmatian as a mascot. 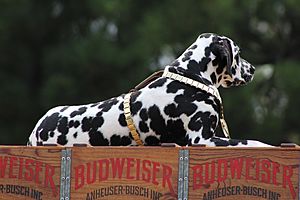 The Dalmatian is also associated, particularly in the United States, with Budweiser beer and the Busch Gardens theme parks, since the Anheuser-Busch company's iconic beer wagon, drawn by a team of Clydesdale horses, is always accompanied by a Dalmatian. The company maintains several teams at various locations, which tour extensively. Dalmatians were historically used by brewers to guard the wagon while the driver was making deliveries.

The Dalmatian breed experienced a massive surge in popularity as a result of the 1956 novel The Hundred and One Dalmatians written by British author Dodie Smith, and later due to the two Walt Disney films based on the book. The Disney animated film released in 1961, later spawned a 1996 live-action remake, 101 Dalmatians. In the years following the release of the sequel 102 Dalmatians, the breed suffered greatly at the hands of irresponsible breeders and inexperienced owners. Many well-meaning enthusiasts purchased Dalmatians—often for their children—without educating themselves on the breed and the responsibilities that come with owning such a high-energy dog breed. Dalmatians were abandoned in large numbers by their original owners and left with animal shelters. As a result, Dalmatian rescue organizations sprang up to care for the unwanted dogs and find them new homes. AKC registrations of Dalmatians decreased 90% during the 2000–2010 period.

All content from Kiddle encyclopedia articles (including the article images and facts) can be freely used under Attribution-ShareAlike license, unless stated otherwise. Cite this article:
Dalmatian (dog) Facts for Kids. Kiddle Encyclopedia.