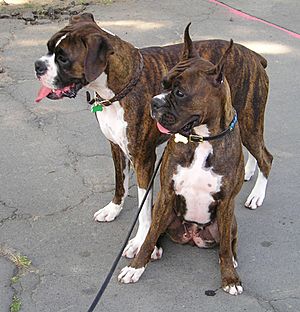 The Boxer is a breed of dog. With good care, a Boxer can be an ideal pet and companion.

Boxers are good guard dogs. They are strong and like to run in open spaces. They can have a coat in various colors, such as fawn, brindle, fawn-brindle mix, white, white-fawn mix, and brindle-white mix. Males are 22-25 inches at the withers (tops of the shoulders) and the females are 21-24 inches at the withers. These dogs can range from medium size (65 lbs) to medium large (75 lbs). Boxers are one of the most popular breeds of dogs in the US and over-breeding is a concern.

Boxers are loyal dogs and unlike certain breeds, are not "one-person" dogs. They can become loyal to a person, family or group of persons and family friends. They make friends by nature and are curious dogs who love to explore. They are well-suited to be with children and elderly persons, though they can knock people down playing. These dogs may be feared because of their fearsome stance that can look intimidating. They rarely bark without a reason.

They have a high energy level and require lots of exercise. They love to play and have fun. Owners note that they act "puppy-like" their entire lifetime. Their temperament is jovial. Mean Boxers are a rarity. Boxers love to chase, run, play tag and get any form of attention whenever possible. Boxers are easy to train to do tricks, especially for rewards including attention, love and recognition. They are clever dogs with a good memory. They love to ride in vehicles and are good "road trip" dogs.

These dogs can have some neurotic behaviors and can become anxious if left alone. If they are left alone, "crate-training" is important. Dogs who are crate trained do not mind the practice and often feel secure in a den-like setting. But being in an open house may make the dog agoraphobic, causing them to destroy things. Boxers are easily trained and want to please. While not aggressive, they will show some protective behaviors over their owners and families, especially children. Boxers do well with other dogs and pets such as cats, if they are properly acquainted and socialized. Because Boxers are very bright dogs, they may challenge an owner mentally by being defiant or by being openly obstinate. This type of behavior requires training and patience.

Many veterinarians now refuse to crop (cut, bandage and splint to produce points) the Boxer's ears and many owners prefer the "naturally-floppy ears" to avoid painful and possibly cruel cosmetic surgery. Many owners like the cute appearance. Most Boxers have their tail cropped at birth. White Boxers, which were drowned at birth for much of the breed's span, are now sold or allowed to be distributed as pets, though most are neutered or spayed to prevent breeding.

Medical issues common to Boxers include hereditary conditions such as hip dysplasia, certain forms of heart defects and certain forms of cancer. A reputable breeder vs. a "puppy-mill" Boxer is recommended. All dogs should get all necessary and regular vaccinations, have regular veterinarian checkups and teeth cleanings, along with a good diet and plenty of exercise. The average lifespan of a healthy Boxer is 9–11 years. Many people get a Boxer and then may give it to a rescue or pound because they are not ready or willing to devote the time that Boxers require for training and attention. A Boxer will not be ignored and will go to great lengths to draw attention to itself, good or even bad. Jumping on people is a common complaint, so positive reinforcement training is a must. They are affable, lovable, clown-like, yet dedicated dogs who adore their owner(s).

The Boxer was bred in Germany and was originally bred for bull-bating and dog fights, but when that was ruled out they were used as hunting dogs and farm dogs and just regular house pets. The Boxer breed was created from the brabanter and Bullenbeiser. Though originally bred to fight and later used as a military sentry or police dog, Boxer owners will confirm that this type of role is no longer suitable for Boxers, as many decades of breeding had produced a dog that is too docile for this type of duty.

All content from Kiddle encyclopedia articles (including the article images and facts) can be freely used under Attribution-ShareAlike license, unless stated otherwise. Cite this article:
Boxer (dog) Facts for Kids. Kiddle Encyclopedia.