The Bull Terrier is a breed of dog that originated in 19th-century England from a mixture of other dogs. They were first used as fighting dogs. 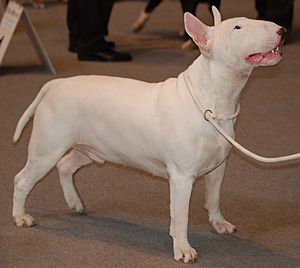 The Bull Terrier's most recognizable feature is its head, described as 'egg-shaped' when viewed from the front; the top of the skull is almost flat. The profile curves gently downwards from the top of the skull to the tip of the nose, which is black and bent downwards at the tip, with well developed nostrils. The under-jaw is deep and strong. The unique triangular eyes are small, dark, and deep-set. Bull Terriers are the only dogs that have triangular eyes. The body is full and round, with strong, muscular shoulders. The tail is carried horizontally. They are either white, red, fawn, black, brindle, or a combination of these.

Bull Terriers can be both independent and stubborn and for this reason are not considered suitable for an inexperienced dog owner. A Bull Terrier has an even temperament and is amenable to discipline. Although obstinate, they are particularly good with people. Early socialisation will ensure that the dog will get along with other dogs and animals. Their personality is described as courageous, full of spirit, with a fun-loving attitude, a children-loving dog and a perfect family member. A 2008 study in Germany showed that Bull Terriers have no significant temperament difference from Golden retrievers in overall temperament researches.

All puppies should be checked for deafness, which occurs in 20.4% of pure white Bull Terriers and 1.3% of colored Bull Terriers and is difficult to notice, especially in a relatively young puppy. Many Bull Terriers have a tendency to develop skin allergies. Insect bites, such as those from fleas, and sometimes mosquitoes and mites, can produce a generalised allergic response of hives, rash, and itching. This problem can be stopped by keeping the dog free of contact from these insects, but this is definitely a consideration in climates or circumstances where exposure to these insects is inevitable. A UK breed survey puts their median lifespan at 10 years and their mean at 9 years (1 s.f., RSE = 13.87% 2 d. p.), with a good number of dogs living to 10–15 years. 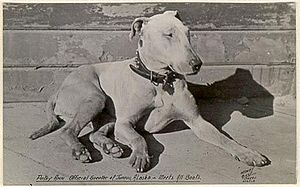 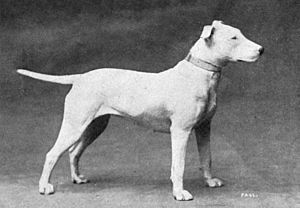 At the start of the 19th century the "Bull and Terrier" breeds were developed to satisfy the needs for vermin control and animal-based blood sports. The Bull and Terriers were based on the Old English Bulldog (now extinct) and Old English Terriers with possible other terriers. This new breed combined the speed and dexterity of lightly built terriers with the dour tenacity of the Bulldog, which was a poor performer in most combat situations, having been bred almost exclusively for fighting bulls and bears tied to a post. Many breeders began to breed bulldogs with terriers, arguing that such a mixture enhances the quality of fighting. Despite the fact that a cross between a bulldog and a terrier was of high value, very little or nothing was done to preserve the breed in its original form. Due to the lack of breed standards—breeding was for performance, not appearance—the "Bull and Terrier" eventually divided into the ancestors of "Bull Terriers" and "Staffordshire Bull Terriers", both smaller and easier to handle than the progenitor.

In the mid-19th century James Hinks started breeding Bull and Terriers with "English White Terriers" (now extinct), looking for a cleaner appearance with better legs and nicer head. In 1862, Hinks entered a dam called "Puss" sired by his white Bulldog called "Madman" into the Bull Terrier Class at the dog show held at the Cremorne Gardens in Chelsea. Originally known as the "Hinks Breed" and "The White Cavalier", these dogs did not yet have the now-familiar "egg face", but kept the stop in the skull profile. The dog was immediately popular and breeding continued, using Dalmatian, Spanish Pointer, and Whippet to increase elegance and agility; and Borzoi and Rough Collie to reduce the stop. Hinks wanted his dogs white, and bred specifically for this. The first modern Bull Terrier is now recognised as "Lord Gladiator", from 1917, being the first dog with no stop at all.

Due to medical problems associated with all-white breeding, Ted Lyon among others began introducing colour, using Staffordshire Bull Terriers in the early 20th century. Coloured Bull Terriers were recognised as a separate variety (at least by the AKC) in 1936. Brindle is the preferred colour, but other colours are welcome.

Along with conformation, specific behaviour traits were sought. The epithet "White cavalier", harking back to an age of chivalry, was bestowed on a breed which while never seeking to start a fight was well able to finish one, while socialising well with its "pack", including children and pups. Hinks himself had always aimed at a "gentleman's companion" dog rather than a pit-fighter—though Bullies were often entered in the pits, with some success. 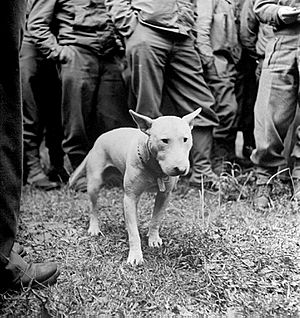 Willie, wearing his regulation Army dog tag, with General Patton and the U.S. Third Army on the drive to Paris (August 1944)

All content from Kiddle encyclopedia articles (including the article images and facts) can be freely used under Attribution-ShareAlike license, unless stated otherwise. Cite this article:
Bull Terrier Facts for Kids. Kiddle Encyclopedia.