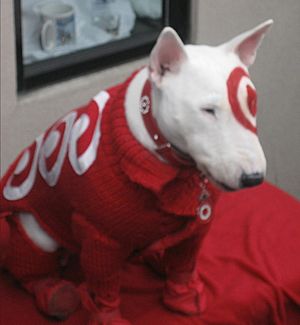 Bullseye at the start of the Iditarod in 2009.

Bullseye is the mascot of Target Corporation. It is a Bull Terrier that is used for Target's advertising and marketing starting in 1999. The dog has the Target logo on its left eye. The makeup used for the logo is natural and non-toxic.

There have been many Bull Terriers that have had the role of Bullseye. Only one dog works as Bullseye at a time until another one can get the role. Bullseye lives on a ranch next to Los Angeles. Its owner is dog trainer David McMillan. In 2004, Target asked the artist Amy Brazil to make a painting of Bullseye. Brazil made an 8 ft by 8 ft portrait of Bullseye. The portrait is now in Target's headquarters in Minnesota.

All content from Kiddle encyclopedia articles (including the article images and facts) can be freely used under Attribution-ShareAlike license, unless stated otherwise. Cite this article:
Bullseye (mascot) Facts for Kids. Kiddle Encyclopedia.