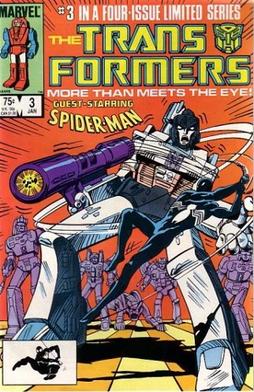 Spider-Man battles Megatron on the cover of The Transformers #3

Transformers are make-believe robots that are made by a toy company named Hasbro. In the story, they come from a planet called Cybertron. There are two main types of Transformers. These are the Autobots, the good guys, and the Decepticons, the bad guys. The leader of the Autobots is named Optimus Prime, and the leader of the Decepticons is named Megatron. Denny O'Neil created the name "Optimus Prime".Transformers can transform into different things like cars, planes, guns, and animals. Transformers were first made in 1984. There have been many different Transformers toys and stories since then.

Some people call the first Transformers toys, shows, and comics "G1," which is short for "Generation One." The first Transformers toys came from Japan. In Japan, the toys were from different toy lines called Microman and Diaclone. Hasbro took some of the same toys, gave some of them different colors, and called them Transformers. They asked a comic book writer named Bob Budiansky to make up new names for the robots. Bob Budiansky also decided what the robots liked, what they did not like, and how they felt about things. In Japan, the robots originally did not have names and were not alive. They were just machines that were driven by people. Bob Budiansky also wrote the Transformers comic book that was made by Marvel Comics. Spider-Man was even in one of the early Transformers comics.

There was also a Transformers cartoon on TV. The TV show told a different story than the comic book. In the cartoon, the Autobots were looking for energy and the Decepticons chased them to Earth. In the comic book, the Autobots had to stop an asteroid (a big rock in space) from crashing into Cybertron. Another difference is that the story behind each character is different in the cartoon for a lot of robots, like the Dinobots, Jetfire (who is called Skyfire on TV), the Constructicons, and Omega Supreme. Even the way new robots were created was different. In the comic book, Optimus Prime uses the Creation Matrix to make new Transformers. In the cartoon, there is a computer called Vector Sigma that can make new robots.

In 1986, a Transformers movie was made. It was called The Transformers: the Movie and was a story about the future. In the story, it is the year 2005. Optimus Prime is killed by Megatron, and a new Autobot called Ultra Magnus becomes the new Autobot leader. The Autobots have to stop a planet-eating monster called Unicorn, who can also transform into a giant robot. Unicorn also meets Megatron and gives him a new body and a new name, and he becomes Galvatron. At the end of the movie, Unicorn is destroyed.

The TV show also told the story of the year 2005. We learn that the Transformers were once robot slaves who had to work for aliens called Quintessons. The Autobots did not like being slaves, so they chased the Quintessons away from Cybertron. Kids liked Optimus Prime and were sad that he died, so the writers made a story in which he came back to life. In Japan, the TV show continued with new cartoons that were not seen in America.

The comic book was still being made after the TV show ended. Many robots who were not seen in the cartoon were in the comic book, like Darkwing and Skids. There was even a story about how the Transformers met G.I. Joe, another Hasbro toy line.

Beast Wars was about Transformers who could turn into animals. They looked like real animals, but they were robots in disguise. The good guys were called Maximals, and their leader was Optimus Primal. The bad guys were called Predacons, and their leader's name was Megatron. (He was a different Megatron from the Decepticon leader.) In the story, the Maximals and Predacons crashed on Earth a very long time ago, but they did not know where they were. Also, there was too much energy on the planet and it hurt their bodies. They turned into animals to protect themselves from the energy. They could only turn into robots for a short time before the energy started to hurt them.

Later in the story, many of the robots turn into Transmetals, which means they looked like robot animals instead of real animals. The Predacons find out they are on Earth, and Megatron tries to find the Autobots and Decepticons, who are on a space ship called the Ark. Megatron tries to kill Optimus Prime, who is still sleeping, so that he can change the future.

There was another show called Beast Machines that continues the story that started in Beast Wars. At the end of Beast Wars, the Maximals tried to catch Megatron. At the beginning of Beast Machines, he escapes and takes control over Cybertron. There are only four Maximals left and Megatron tries to stop them. Megatron creates new robots called Vehicons, who try to catch the Maximals. Later, we learn that the Vehicons are really Maximals or Predacons that Megatron caught and tried to control. In the story, we also learn that even though Cybertron is a dead, metal planet, it used to be a living planet like Earth.

All content from Kiddle encyclopedia articles (including the article images and facts) can be freely used under Attribution-ShareAlike license, unless stated otherwise. Cite this article:
Transformers Facts for Kids. Kiddle Encyclopedia.