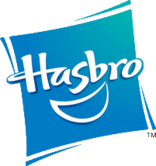 Hasbro is an American toy company. It is one of the biggest toy makers in the world, only Mattel is larger.

Their main office is in Pawtucket, Rhode Island, United States.

The company is best known for their popular 1990's electronic audio game Bop It, which got re-designed in 2008 with a series of designs which one is released each year. Hasbro have also joined up with many other companies such as Tiger Electronics who made the following audio games: Brain Warp, Brain Bash, Brain Shift and Bogoey Ball.

All content from Kiddle encyclopedia articles (including the article images and facts) can be freely used under Attribution-ShareAlike license, unless stated otherwise. Cite this article:
Hasbro Facts for Kids. Kiddle Encyclopedia.